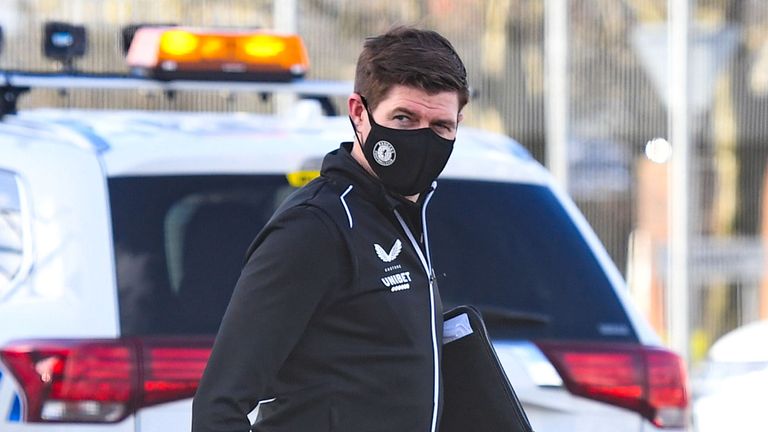 Team news and stats ahead of Antwerp vs Rangers in the Europa League last 32 on Thursday; kick-off 8pm.

Rangers will have Alfredo Morelos and fellow striker Kemar Roofe back after their domestic suspensions.

Bongani Zungu, Nathan Patterson and Calvin Bassey, young goalkeeper Brian Kinnear, and his fellow academy player Dapo Mebude, on loan at Queen of the South, have been told to isolate after breaking lockdown regulations at the weekend.

Zungu, Patterson and Bassey have been mostly used as back-ups this season but would have been in the Gers group for the first leg of the Europa League last-32 tie against Royal Antwerp in Belgium on Thursday night.

Defender Leon Balogun and Roofe are both just one booking away from a European suspension, which would see them miss the second leg.

Antwerp boss Franky Vercauteren is without several first-team players with top goalscorer Dieumerci Mbokani, who has missed the last four weeks with a calf injury, the most notable absentee.

Dylan Batubinsika, Jean Butez (both ankle), Faris Haroun and Matheus (both calf) have been ruled out.

Rangers’ preparations for their trip to Belgium to take on Royal Antwerp were thrown into chaos when an internal investigation revealed five players had broken Covid-19 rules.

Boss Steven Gerrard said he felt “let down” by those who had breached Scotland’s strict lockdown restrictions.

The five players were named as Bongani Zungu, Nathan Patterson, Calvin Bassey, Dapo Mebude and Brian Kinnear and removed from the club while they isolate.

Gerrard insists the episode will “not affect us as a group”, but there is no denying it has been a huge distraction for the former England captain.

What can Rangers expect from Antwerp?

The manager: Franky Vercauteren is no stranger to European success as a player, winning the European Cup Winners’ Cup twice, the UEFA Cup and two European Super Cups with Anderlecht. He was also a key member of the Belgium squad that reached the 1986 World Cup semi-finals.

The 56-year-old was appointed in early January. He has previously managed a number of clubs in Belgium including Anderlecht and had an interim spell in charge of his national team in 2009.

Form guide: Antwerp have won six out of 10 matches since their managerial change with their most recent game a 1-1 draw with Liege on Sunday, which left them second in the league, 13 points adrift of Club Brugge. Antwerp finished a point behind Tottenham in the group stage but did beat Spurs at home. They finished on 12 points, ahead of LASK and Ludogorets.

European pedigree: Antwerp ended a 25-year exile from European competition last season but went out at the Europa League play-off stage against AZ Alkmaar. Their best season by far in Europe was in 1992-93 when they got to the Cup Winners’ Cup final before losing to Parma. They have twice faced Scottish clubs, suffering a 7-2 thrashing by Kilmarnock at Rugby Park in 1966 but inflicting a 4-0 UEFA Cup defeat on Dundee United in Belgium in 1990, a little over two years after Jim McLean’s side had reached the final.