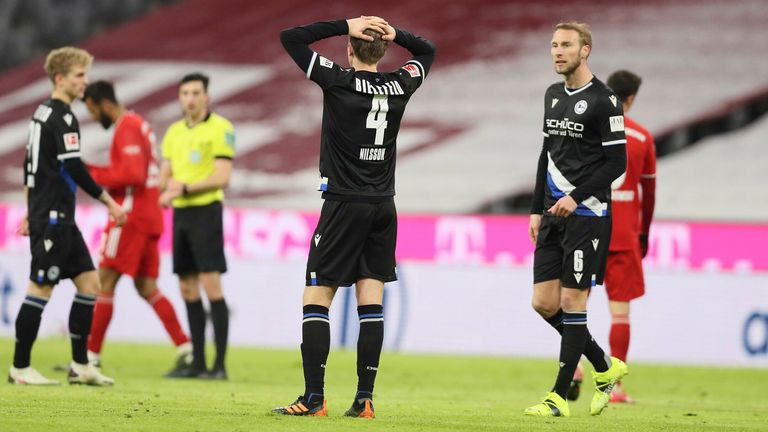 Bayern Munich fought back in a thrilling 3-3 Bundesliga draw with Arminia Bielefeld to avoid a first home defeat since November 2019.

Hans-Dieter Flick’s side had just returned from Qatar having won the FIFA Club World Cup, their sixth trophy in nine months. But Bielefeld, who were occupying the relegation play-off place, led 2-0 at the break through Michel Vlap’s classy finish and Amos Pieper’s close-range header, the defender’s first Bundesliga goal.

The first half was played in heavy snow and the game was stopped twice for ground staff to clear the lines.

The weather improved in the second half and so did Bayern’s fortunes as Robert Lewandowski quickly controlled David Alaba’s cross on his chest to fire home a brilliant volley for his 30th goal of the season.

Leroy Sane spared Bayern’s blushes as his delivery from wide set up goals for Corentin Tolisso and Alphonso Davies.

Sergio Cordova saw his effort for Bielefeld ruled out for offside and Bayern’s lead over second-placed RB Leipzig now stands at five points.

Athletic Bilbao coasted to a 4-0 victory over Cadiz to move into the top half of La Liga.

Alex Berenguer fired Bilbao ahead after four minutes and Unai Lopez soon doubled the lead with a fine free-kick.

Berenguer grabbed his second after 29 minutes and Inaki Williams’ seventh goal of the season after the restart wrapped up matters.

Hellas Verona produced a 2-1 comeback win over Parma in Italy’s Serie A.

Parma took an eighth-minute lead when Yann Karamoh was brought down by goalkeeper Marco Silvestri and Juraj Kucka converted from the penalty spot.

Verona were quickly level as Alberto Grassi put through his own goal from Federico Dimarco’s shot.

Victory was secured by Antonin Barak’s strike after 62 minutes, Verona’s 1,000th goal in Serie A.