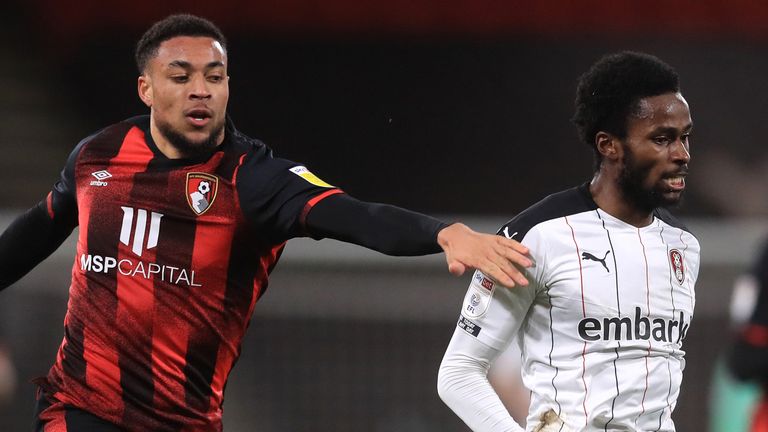 Denmark international Billing struck midway through the first half to ensure the Cherries extended their unbeaten run under caretaker-boss Jonathan Woodgate to four matches.

Bournemouth were looking for only their third win in eight games against a Rotherham side bidding for a fourth successive away victory.

The Cherries started brightly with Holland midfielder Arnaut Danjuma curling into the gloves of Millers goalkeeper Viktor Johansson from the edge of the penalty area in the 16th minute.

Soon after, a route one free-kick from Johansson caused havoc in the Bournemouth box but opposite number Asmir Begovic just about managed to punch the ball clear.

The lively Danjuma then fired tamely into Johansson’s arms after being teed up by Sam Surridge before Matt Crooks shot into the side-netting at the end of a rare Rotherham attack.

The deadlock was broken in the 23rd minute when Bournemouth caught out their visitors with a rapid counter-attack.

Adam Smith started the move with a header from inside his own half before playing a neat one-two with Surridge and crossing for Billing to blast home from 12 yards.

Rotherham had not come back from 1-0 down to win in any of their previous 30 Championship matches.

But the Cherries had a massive let-off a minute before half-time when Rotherham captain Richard Wood missed a gilt-edged chance to make it 1-1.

Michael Ihiekwe did well to head Daniel Barlaser’s free-kick across the face of goal and Wood looked certain to score but somehow contrived to turn the ball over from inside the six-yard box.

Former England star Woodgate brought on Wales winger David Brooks for the ineffective Danjuma 17 minutes into the second half in a bid to introduce some extra attacking spark.

The home side appealed for a penalty for handball when goal-scorer Billing’s 22-yard strike was blocked by Wood but referee Keith Stroud was unimpressed.

It took a superb save from Begovic to keep Bournemouth’s 1-0 lead intact in the 67th minute.

Ben Wiles let fly with a venomous shot from just outside the penalty area and Begovic flung himself acrobatically to his top left corner to turn it behind for a corner.

Substitute Freddie Ladapo could have scored with his first touch after coming on but failed to keep his shot down after being put through one-on-one with Begovic.

Johansson made an excellent stoppage-time save to beat away Junior Stanislas’ stinging shot at his near post as Bournemouth pressed for a late second goal.

Bournemouth caretaker Jonathan Woodgate: “I don’t know what is happening yet. I will speak to the board and see where we go. It is a boring answer but I will take it one game at a time. That is the right answer. I have always had an appetite to be involved in football. I am a lover of football at the end of the day.

“It was a battle. We knew from the start of the game what it was going to be like, but the players stuck to the task and got the 1-0 victory. It does not matter how you get the victory as long as you get it in the end.”

Rotherham’s Paul Warne: “We were okay. We were pretty pleased how we played. We were good out of possession but not so good out of possession. The lads in the dressing room are a bit disappointed we have come away with nothing. We threw the kitchen sink as best we could and the best compliment that I can pay the lads is that Bournemouth were quite happy to hear the final whistle.

“I am really proud of the team because we gave a good account of ourselves. I thought we created a lot and made them defend a lot so our effort and endeavor should be applauded. I came here with confidence that we would cause them problems if we played at our best and we go away full of confidence. We have shown how well we can pay and that we can be competitive against anyone.”