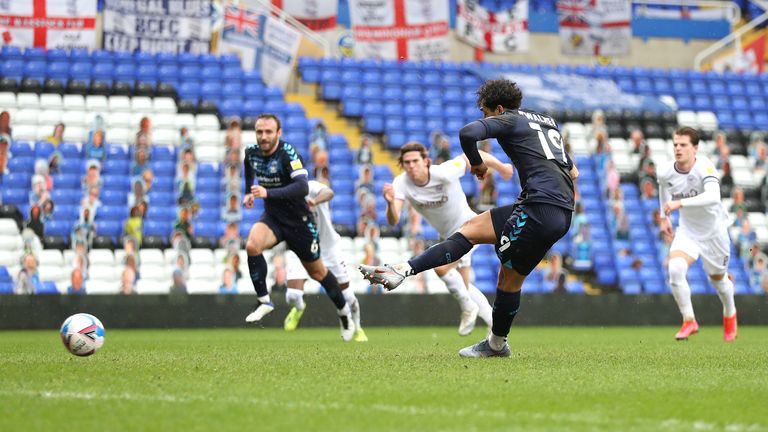 Tyler Walker struck twice as Coventry beat Brentford 2-0 to give them three valuable points in their battle against Championship relegation and put another large dent in their visitors’ promotion hopes.

The Sky Blues’ striker took centre stage as the league’s top scorer Ivan Toney missed out with an ankle injury for Brentford, scoring from the penalty spot on 19 minutes and doubling his tally for the afternoon with a smart turn and finish 10 minutes after the break.

It ends a five-game winless run for Mark Robins’ side, who pressed and harried Brentford high up the pitch all game and fully deserved their three points.

Thomas Frank’s Bees, meanwhile, were off the pace from the very first whistle and after a 21-game unbeaten run in the league had them on course for an automatic promotion spot, they have lost three successive matches for the first time this season.

How Coventry pressed to an impressive three points

Brentford were without 24-goal Toney for the first time this season and on the back of two successive defeats, they never got started against an energetic Coventry side. Robins tweaked his team’s formation and with two strikers on the pitch, they pressed the Brentford defenders and stopped them from playing out.

Callum O’Hare had already stung David Raya’s palms from range when Maxime Biamou’s volley was pushed away by the visiting ‘keeper. But Biamou reacted quickly to get to the ball following the save, nipped in ahead of Rico Henry and the assistant referee immediately flagged for a penalty following Henry’s trip.

It was not the best penalty from Walker, but the ball squirmed under the body of Raya and into the back of the net.

Coventry nearly doubled their lead through O’Hare. His fierce volley from close-range was somehow diverted over the bar by Raya as Brentford went to sleep in their own box again.

The second half started in the same manner and Coventry’s high press finally paid dividends 10 minutes after the break. O’Hare picked off Raya’s sloppy pass out from a goal-kick, found Walker in the box and the striker did the rest, turning his defender and finding the bottom corner with ease for his fifth league goal of the campaign.

Frank’s frustration on the touchline was building with every minute and every time the Sky Blues’ press broke down another Bees move before it started. After making a triple change on the hour-mark, Frank’s misery was compounded when Henry injured his hamstring as he stretched to get on the end of a ball.

That Coventry goalkeeper Marc Wilson’s first save of note came on 68 minutes showed just how Brentford struggled in attack and the efficiency of the hosts’ defence. He pushed away a long-range Mathias Jensen strike before Henrik Dalsgaard’s low volley bobbled past the post shortly after.

The hosts never looked like giving up their advantage in the final 20 minutes and Robins will know more performances like that will ensure their stay in the second tier does not last for a single season. Frank will need to pick up his troops quickly as they look to get their promotion push back on track.

Man of the match – Tyler Walker

“He’s been excellent. Early on he set the tempo, making runs behind the Brentford backline. He got the penalty and then his fantastic second goal gave Coventry the points. Chuck in the work he did in the press and out of possession, and it’s been an all-round good afternoon for Tyler Walker.”

Both sides are back in action on Wednesday night at 7pm as Brentford host strugglers Sheffield Wednesday, while Coventry travel to promotion-chasing Swansea.