Darren Lewis: We aren't asking why black players are frustrated 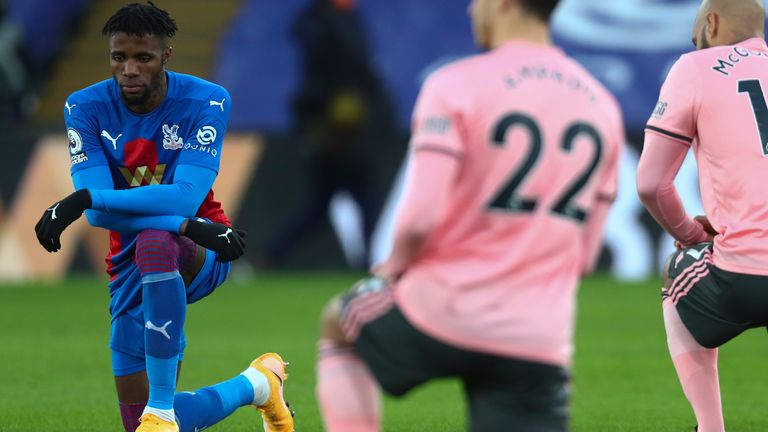 Comments by Crystal Palace’s Wilfried Zaha and Brentford’s Ivan Toney on taking a knee have been misunderstood, says Darren Lewis, who discusses why it is so important to understand why black footballers are so frustrated.

Since Project Restart last summer, players, officials and staff at Premier League and EFL games have been taking a knee before kick-off to show support for the global anti-racism movement.

Premier League clubs’ shirts also carried the Black Lives Matter slogan during the restarted 2019/20 season before being changed for this campaign to feature a patch promoting the league’s own anti-discrimination campaign No Room For Racism.

England manager Gareth Southgate believes the gesture is still hugely powerful and has not lost its message, but many believe it is quickly losing its original meaning.

Crystal Palace forward Zaha recently reiterated his belief that taking a knee is “degrading”, and several teams have stopped making the gesture before matches including Brentford, with striker Toney feeling players are being “used like puppets”.

Speaking on Super Sunday Matchday, Daily Mirror assistant editor Lewis said: “Instead of running around trying to find other players and asking them whether they are taking the knee or not, or asking people what they think of the decision not to take a knee, why aren’t we exploring the issues they are frustrated over?

“Why have we stopped talking about the fact there are no black people at the top of the EFL?

“Why have we stopped talking about the fact that, once you finish playing, very often there is no position for you in senior administration or in management in this country?

“Black ex-footballers are second-class citizens in our sport. That’s why players take a knee – but we’re not asking them about that. We’re asking, ‘do you agree that he should or shouldn’t take a knee?’

“The whole thing is a distraction and we have forgotten what it’s for. There are some people who just don’t want people to have a voice. None of us want people running around causing disorder.

“The knee is a dignified way to protest, it’s been done for hundreds and hundreds of years. But people don’t want that either, so what do you want?

“Do you want things to continue as they were, or do you want a situation where people can say, ‘we want change’?

“Not to be better than anyone else, just on the same level. We don’t appear to want that, so what do we want? I’m sure we can’t continue as we were – we can’t and we won’t.

“But we have to listen to what footballers are saying to us and right now we’re not doing that. Some footballers that maybe can’t articulate themselves that well, they’re being suckered into a conversation that is a complete irrelevance.

“The real conversation we should be having about our sport is, ‘why is it not changing?’ Why are we six months into a season where, for all the talk, nothing has changed?”

Lewis pointed out the lack of black managers in the English game and used Championship side Bournemouth as an example, who have appointed Jonathan Woodgate as their head coach until the end of the season.

Former black players such as Thierry Henry, currently managing Montreal in the MLS, and Patrick Vieira, sacked by Nice in December, had been linked to the role at the Vitality Stadium.

Currently, there are just five black or mixed heritage managers across England’s four professional leagues, with League One club Northampton’s sacking of Keith Curle earlier in February having reduced the total.

“There are still ex-pros who cannot get a job in management,” Lewis added. “Jonathan Woodgate’s just got that job – fair play to him and no reflection whatsoever on Bournemouth – but it’s another job with another white manager.

“Lots of people will be upset with me for saying that, but we are in a sport where, no matter how much leadership you show as a black footballer, you cannot get a job in management.

“The numbers bear it out so I’m not just shooting from the hip. You look at the numbers – they are shameful for our sport. That’s why black footballers are taking a knee.

“But instead we are chasing after footballers asking whether they are going to do it or not. When they say they’re not, we’re getting hysterical. We are not seeing the big picture.

“That’s why I tend not to get involved in other debates about it, because they are a complete misdirection. We must stop talking about this and our industry, on this issue, has to do better. We have to do better.”