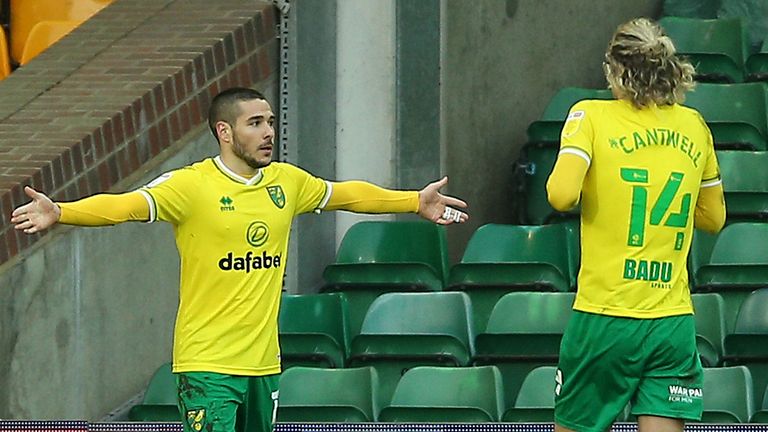 Jonathan Oakes is joined by pundit Andy Hinchcliffe and commentator David Stowell to discuss all the latest from the Championship, League One and League Two.

There was another twist in the race for the Premier League after Brentford were beaten, while Cardiff continue their resurgence under Mick McCarthy, and we hear from Coventry loanee Matty James in Ten To Tackle.

All leagues and angles are covered in this week’s show, but here were some of the main talking points…

Buendia returns, and so do Norwich

A sending off and then a two-match ban for Emi Buendia had seen Norwich fail to score in three games. But his return coincided with a 4-1 thumping of Stoke and a return to the top of the Championship table on Saturday.

Hinchcliffe: “They are not a one-man team. They have good players with Todd Cantwell, Kenny McClean and Teemu Pukki, but they miss Buendia so much when he’s not there.

“But he needs to keep his head. He gets booked and sent off and Norwich have lost him for periods, and they tend not to win when he’s not there. If he can continue to put in the performances he has done then I don’t see any problem with Norwich getting promoted. He is their star man.”

Hinchcliffe compared Mick McCarthy’s impact at Cardiff to that of Thomas Tuchel at Chelsea in terms of how he has improved results in recent weeks.

Five defeats on the bounce in the Championship led to the sacking of Neil Harris last month, but two draws and then three wins under McCarthy has seen the Bluebirds rise back into the play-off equation.

Stowell: “There was a sense that under Neil Harris they had the tools, but it was all trying to be a bit too complicated. Mick strikes me as the kind of man who goes in, sees the job at hand and keeps things simple for the players.

“They had six defeats in all competitions on the bounce, but now it’s five undefeated. It’s a big turnaround, and players and fans feed off a turnaround like that. Goals are going in. Kieffer Moore is clearly key to this side and he is back. Cardiff can kick on from here.”

“It’s probably Paul Scholes,” he said. “When I was coming through at Manchester United I got to train with him numerous times. I got to watch him and get to know him on a level of playing. I’d say he was a biggest inspiration to me footballing-wise.”

McGeady had been frozen out under Phil Parkinson, but Lee Johnson has brought him back into the fold and the decision seems to be paying dividends.

Stowell: “There’s no doubt that in League One he is a standout talent. I don’t know all the ins and outs of what happened previously and why he was cast aside. But in that league he is a jewel in the crown of a team like Sunderland.

Hinchcliffe: “But I don’t think any player can be indulged not matter how good they are. We know how exceptional McGeady can be on all the ball and how dangerous he is. But his work off the ball is what Johnson will want. It’s up to McGeady to play his part.”

Impacts of the salary cap abandonment

The EFL salary cap for League One and League Two was withdrawn last week following a decision by an independent arbitration panel.

The caps had only been in place since August, but the PFA immediately challenged them, and the panel ruled that the EFL was in breach of the Professional Football Negotiating and Consultative Committee’s (PFNCC) constitution in introducing the caps.

Stowell: “This salary cap initially provoked much discussion and disagreement between chairmen, owners and managers when it was introduced.

“When you introduce a level playing field like they did, it seems strange to then whip it away so quickly. It’s not really had the time to take root and work its way into the game.”