England and Germany fight for Musiala 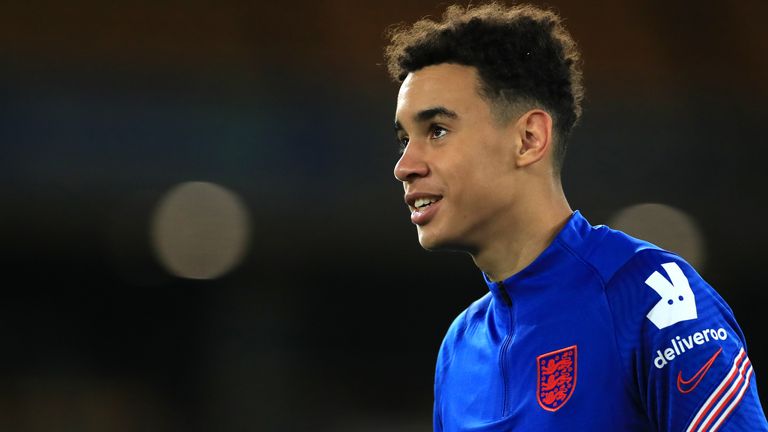 The international tug-of-war over Bayern Munich’s young star Jamal Musiala is intensifying, with the 17-year-old likely to have the choice of a call up by either England or Germany for next month’s international matches.

Musiala is expected to sign a new long-term contract with Bayern on his 18th birthday in 10 days’ time, but his international future is still up in the air.

He has been capped twice already by England U21s, having played for the U15s, U16s and U17s too. Sky Sports News has been told Gareth Southgate has made it clear to the teenager he wants him to remain in the England fold.

But Germany boss Joachim Low said last month he wants Musiala to play for the land of his birth. “I think he knows one way or another that I want to nominate him….the ball’s in his court – it’s his decision.” Musiala has also played U17s football for Germany.

Now, new information obtained by Sky Sports News suggests it is likely Low will offer Musiala a senior Germany call up for the first time next month, whereas Southgate will continue to recommend the midfielder stay with England’s U21s, who are due to play their first games in the U21s Euro finals, which start in March in Hungary and Slovenia before concluding in June.

Separate discussions between Musiala and his family, and the English and German FAs are likely to happen in private.

The choice that Musiala makes next month could be a key indicator of where he sees his future.

It is unlikely England would offer Musiala a senior call up at this stage – partly because there are so few matches between now and the summer Euros, so his opportunities to play would be more limited than with the U21s.

Crucially, a new rule introduced by FIFA at its congress in September allows any player under the age of 21 to switch their international allegiance – even if they have played up to three competitive senior games for another country (although not if it was a competitive game in a senior tournament finals).

That means even if Southgate were to fast-track Musiala into making his senior England debut, he could still choose to represent Germany in the future.

We have been told Musiala’s development has been discussed in detail by Southgate, England U21s manager Aidy Boothroyd and the FA’s new technical director, John McDermott, who took over the role in the new year.

All three are keen for Musiala to commit his future to England, and have stressed to him the successful pathway that players like Mason Mount, Phil Foden and Jude Bellingham have followed in progressing from England’s junior ranks through to the senior squad.

However, the FA is mindful not to put pressure on a young player who is the epitome of ‘dual-nationality’. Musiala was born in Germany and lived there until the age of seven, when he moved to England for nine years. Having come through the Chelsea academy, he then moved back to Germany at the age of 16, in July 2019, and has continued his development with Bayern’s junior teams.

His mother is German and his father is British-Nigerian.

Southgate has said in the past that dual-nationality will become an increasing issue for England going forward. Discussions over Jack Grealish (Ireland), Declan Rice (Ireland) and Wilfried Zaha (Ivory Coast) are proof of that.

“These are difficult decisions for young men,” England’s manager said in 2019. “If you are dual heritage, then you do feel an affinity to more than one country.

“It is a complex situation and will become more so because the world is more transient.

“We have always tried to look at that as ethically as we can.”