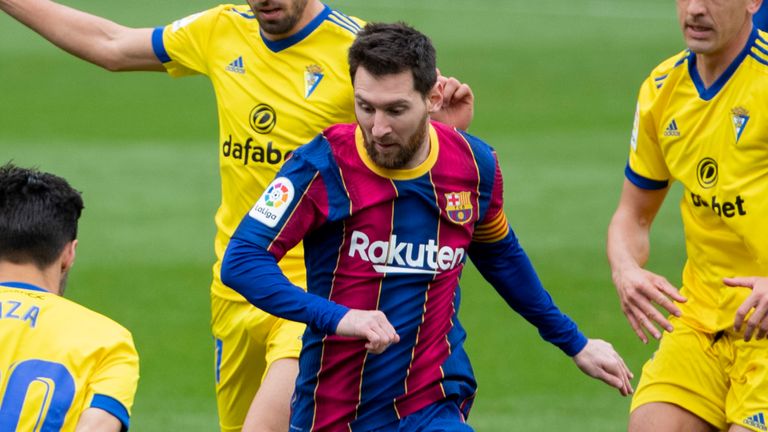 Lionel Messi marked his record 506th appearance for Barcelona in La Liga by scoring a penalty but the Catalans could only draw 1-1 with Cadiz on Saturday after conceding a spot-kick late on.

The Argentine overtook former team-mate, Xavi Hernandez, in the all-time list of Barca appearances in the league and opened the scoring in the 32nd minute by calmly passing the ball into the bottom corner from the spot after Pedri had been tripped by Cadiz’s Iza.

Fielding the same starting 11 that had been thrashed 4-1 at home to Paris Saint-Germain in the Champions League on Tuesday, a rusty looking Barca failed to build on their lead and paid the price when Clement Lenglet gave away a penalty for striking Cadiz forward Ruben Sobrino as he tried to clear the ball.

Cadiz’s Alex Fernandez made no mistake from the spot in the 89th minute to disrupt Barca’s run of seven straight league wins as the Catalans failed to take advantage of La Liga leaders Atletico Madrid’s surprise 2-0 defeat by Levante a day earlier.

Barca are third in the standings on 47 points, trailing leaders Atletico by eight points and second-placed Real Madrid by five points.

“It is disappointing,” Koeman said in comments reported by Marca. “These types of games have to be won and we did not. It was a great opportunity lost after the loss of Atletico. I am very disappointed, more so than on Tuesday.

“We could not afford to let two points get away. I don’t like to blame individual players but we were not up to the task offensively and we have to defend differently. For our quality, we had to win.”

The draw leaves Barca continuing to trail both Madrid clubs but Koeman said there was still time for them to turn things around.

“We can still do something,” he said. “There is no team that wins games easily. But we must recognise that opportunities like this cannot be missed anymore. I don’t think it is unforgivable, but it was an opportunity to close the gap.

“[The league] is not more complicated than before. No team is unbeatable, nor are they going to win every game. There are still options. But we have missed two important points.”

Lautaro Martinez scored twice as Inter Milan established a four-point lead at the top of Serie A with a 3-0 derby win over second-placed AC Milan.

Martinez opened the scoring with a fifth-minute header before Inter keeper Samir Handanovic made a brilliant save to deny Zlatan Ibrahimovic an equaliser.

The Argentinian doubled Inter’s lead in the 57th minute and Romelu Lukaku drove home the third from a tight angle nine minutes later after a defence-splitting pass from Ivan Perisic.

Elsewhere, Udinese hit back from two goals down to grab a precious point in a 2-2 draw at relegation rivals Parma.

The hosts ended a run of eight home games without a goal when Andreas Cornelius headed them in front after three minutes.

Juraj Kucka doubled Parma’s lead from the penalty spot but Stefano Okaka reduced the deficit against his old club, then Bram Nuytinck headed the equaliser 10 minutes from time.

Leipzig power past Hertha to close in on leaders Bayern

RB Leipzig eased past Hertha Berlin 3-0 on Sunday to cut the gap to leaders Bayern Munich to two points with their fourth consecutive Bundesliga victory.

Marcel Sabitzer put the visitors in front in the 28th minute with a ferocious shot from 30 metres that went straight into the top corner with Hertha goalkeeper Rune Jarstein frozen to the spot on a sunny afternoon in the capital.

Nordi Mukiele then took advantage of a mistake by Hertha’s Matteo Guendouzi in the box to drill the ball in and double their lead in the 71st.

Leipzig, who lost 2-0 to Liverpool in their Champions League round-of-16 first leg on Tuesday, were initially on the backfoot with Hertha missing several good chances before Sabitzer’s goal against the run of play.

They then survived late pressure from Hertha with keeper Peter Gulacsi coming to the rescue twice before Willi Orban headed in Leipzig’s third goal in the 84th to seal the win.

The Saxony club are in second place on 47 points, with Bayern top on 49 following their 2-1 loss to Eintracht Frankfurt on Saturday. VfL Wolfsburg and Frankfurt are on 42 in third and fourth place respectively.

Hertha are now without a win in their last eight league games and are stuck in 15th place, level on 18 points with 16th Arminia Bielefeld, who sit in the relegation playoff spot.