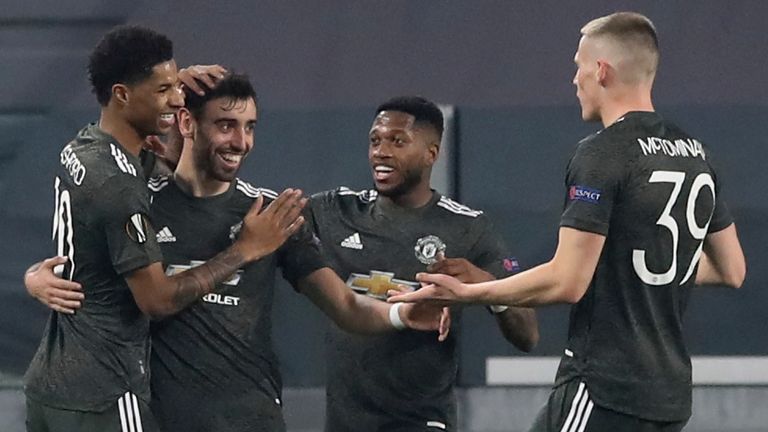 After a run of one victory in five in Premier League games had handed rivals Manchester City the advantage in the title race, Manchester United headed to Turin with their hopes of ending the season with silverware realistically resting on their FA Cup and Europa League campaigns.

The Europa League is often disregarded in favour of the glitz and glamour of the Champions League – a competition United exited so painfully in December – but it was evident from the first whistle just how important this competition is for United’s development under Ole Gunnar Solskjaer.

It’s been four years since United last got their hands on a trophy – which just so happened to be the Europa League – and it’s going to take something special to stop them getting their hands on it again after a long overdue reminder of the attacking talent they possess.

4 – Manchester United recorded the biggest away victory by an English side against a Spanish opponent in the UEFA Cup/Europa League, surpassing Newcastle United’s 3-0 win at Mallorca back in March 2004. Cruise. pic.twitter.com/g2pqoOxoyR

Just as it did in United’s famous treble-winning campaign of 1999, Turin was the venue of a clinical display of counter-attacking football, only this time Bruno Fernandes, Marcus Rashford and Daniel James were stars instead of Roy Keane, Dwight Yorke and Andy Cole.

Three goals that night propelled Manchester United into the Champions League final. This group of players has some way to go before comparisons can even be drawn to that side which had Solskjaer in their ranks. But more victories of this nature could provide that crucial first building block in the form of the Europa League trophy from which United can move to the next level.

Who knows, it could even help transform their fortunes domestically in time for an end-of-season assault on the title.
Jack Wilkinson

A missed opportunity for Arsenal?

It was a night of near misses for Arsenal in Rome. Although they saw the better chances, there was a real feeling of disconnect in attack. It was not through a lack of trying, but the efforts were just not coming off and they mustered just two shots on target.

Many will point to an out-of-sorts performance from Pierre-Emerick Aubameyang. While he scored his first Premier League hat-trick on Sunday, he followed this up with a hat-trick of glaring misses. The first was the most agonising in the 19th minute as he sent the ball wide from close range which probably on any other day, he would have buried with glee.

You could feel then that it just was not his night and as the game continued, the confidence seemed to wane. A later chance saw him take a touch too many, allowing Lucas Verissimo to block the ball away. It almost confirmed – as if it was needed – just how much Arsenal rely on his goals. They could have run away with the tie in the first leg if he had scored the chances that fell his way.

There were other factors too. Martin Odegaard excelled for Arsenal, but his inclusion saw Emile Smith Rowe moved from the position that he has been so effective in recently. The 20-year-old cut a frustrated figure at times and Mikel Arteta has a conundrum on his hands about how to keep both players happy and playing well.

Arsenal were also flagged offside a huge ten times and faced some good defending from former Premier League pair Nicolas Otamendi and Jan Vertonghen, who looked like they had a point to prove.

When asked if he thought Arsenal missed an opportunity to put the tie to bed in the first leg, Mikel Arteta told BT Sport: “I think so. I think we were very dominant, we created some big chances and in Europe, when you have that away from home, you have to be more ruthless.

“Then the disappointing thing is the way we conceded the goal, we just give them the goal. It’s 1-1 and all to play for. We could be in a much better position, but everything will be decided in the next game.”

Next Thursday’s second leg in Athens is now vital for Arsenal’s continued development. Arteta needs to play a fine balancing act as he prepares to face an scarily in-form Manchester City this weekend, live on Sky Sports.
Charlotte Marsh

Gareth Bale reminded Tottenham of what he can offer as he registered a goal and an assist in a 4-1 Europa League win against Wolfsberger.

The Wales international has been a shadow of his former self since his loan return from Real Madrid and looked to have fallen out with boss Jose Mourinho last week after making himself unavailable for the FA Cup game at Everton.

But he was restored to the side for the last-32 first-leg tie in Budapest and put in his best display since returning to the club, as he set up Heung-Min Son’s opener and then doubled the lead with a fine goal.

Indeed, the Welshman registered his first Spurs assist since April 2013, when he assisted Clint Dempsey in a 3-1 Premier League win over Manchester City.

There were glimpses during the 3-0 defeat at Manchester City last weekend that following his recent bad publicity, he had started to turn a corner.

“We had the mindset of coming to score as many goals as we could and get some confidence,” Bale said. “Obviously we haven’t won many lately so it’s important to get a win to breed confidence. Hopefully this is the start of a good run.

“It was good [to score]. I just chopped inside and hit it. It’s nice to get on the scoresheet to help the team. It’s good to get four away goals. It’s always good to win a game by that margin. We’ll take the second leg like it’s 0-0.”

The Austrians were sluggish in the opening half – probably not helped by being forced to make a six-hour coach trip to the Puskas Arena – but Bale showed a ruthless streak that has deserted him up until now following his loan move from Real Madrid.

Here, he announced himself with the best piece of play since he returned to the club, leaving Jonathan Scherzer for dead before lashing a shot into the far corner. Bale must use it as a springboard for the remainder of the season.
Ben Grounds

Rangers arrived at the Bosuilstadion to face an Antwerp team currently sitting second in the Belgium top flight and who gave Tottenham a run for their money in the group phase.

But very little fazes Steven Gerrard’s side these days, a confidence no doubt earned by not losing games. In fact, Rangers have now only lost one of their last 40 matches in all competitions (W33 D6) this season.

That has also made them a more mature team, one that can withstand the type of setbacks they experienced in Belgium on Thursday night when they had to contend with numerous perplexing refereeing decisions, injuries to key players and no luck at all as they appeared to be slipping towards a very rare defeat.

But the visitors would not lie down or give in and got their just rewards with two late goals to turn the tie on its head and see Gerrard and Co head back to Glasgow with a 4-3 advantage.
Richard Morgan

Leicester’s depth set to be tested

With Leicester flying high in the Premier League and a significant game coming up on Sunday against Aston Villa, you’d have been forgiven for expecting Brendan Rodgers to make changes for his side’s trip to Prague.

However, the Leicester boss had all his big guns out as he looked to take an advantage back to the King Power Stadium for next week’s second leg.

It wasn’t to be though as the likes of Jamie Vardy, James Maddison were left frustrated by a determined Slavia Prague side.

This was by no means a disastrous result for Leicester, who should have more than enough to get past the Czech champions at home, but, with the club still fighting on three fronts, Rodgers’ resources will be tested to the limit in the coming weeks.

Full-backs James Justin, who is out for the season, Timothy Castagne and Ricardo Pereira are all missing, as are Ayoze Perez, Dennis Praet, Wes Morgan and Wesley Fofana.

Maddison also looked to be struggling when he was pulled out of the action after 76 minutes and Vardy was only afforded 60 minutes as he continued his return from injury, while Kelechi Iheanacho will not be available for next week’s second leg after picking up a booking, which leaves him suspended.

The Foxes have had a remarkable season so far. They are third in the Premier League with Villa on their agenda next before another big game against Arsenal. They also have next week’s crucial second leg against Slavia Prague and also with an FA Cup quarter-final against Manchester United to look forward to next month.

Rodgers will certainly have to weigh up his team selections in the coming weeks as he looks to keep an already depleted squad fit and firing on three fronts.
Oliver Yew

Guardiola: Come on you Irons!