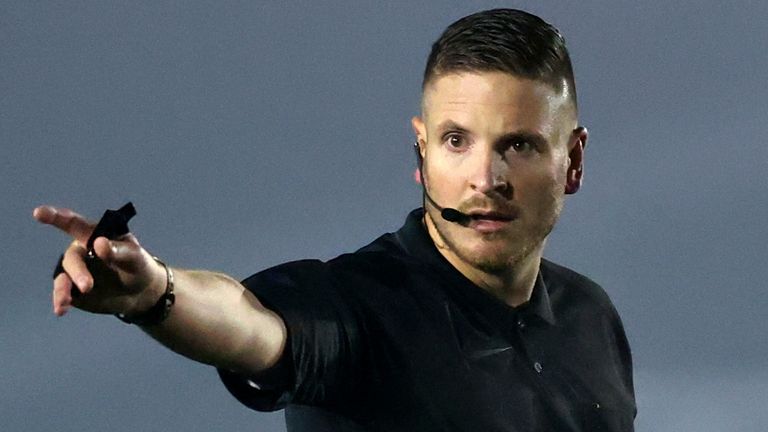 Players face the potential of a lifetime ban if they assault match officials from next season, under tougher new proposals from the Football Association.

English football’s governing body is in talks over removing the maximum punishment of 10 years, which needs the approval of the FA board.

Last season, there were 77 reported incidents of assault towards match officials, 15 of which were found not proven, and authorities are pushing for a stronger deterrent to reduce the threat of physical abuse.

New data disclosed by the FA has revealed that nearly 80 per cent of match officials remain in their roles after each season, with more than 5,000 new recruits each year. 90 per cent of new referees recruited are under the age of 21.

“We’ve increased our numbers over three years. I think people are more interested in refereeing than they were before. One of the issues football could face, not just refereeing, is after a period of Coronavirus, are as many people going to be interested in the game?

“But I think we’re getting more and more people wanting to get as high up the [football] pyramid as possible. Is the Premier League going to have to recruit referees from elsewhere around the world? I don’t think so.”

Mike Dean will return to refereeing in the Premier League on Saturday having stood down last weekend after receiving death threats on social media.

Dean is employed by the Professional Game Match Officials Limited [PGMOL] but has received ongoing support from the FA.

“I offered him our entire support, and he appreciated it,” said Peter Elsworth, FA senior referee manager. “I had good chat with him on the phone and he was very happy with the support that has been offered to him and his family. There was an open invite there. If there was anything more he needs, he just needs to let us know, and we would obviously support him in whatever he needs.”

Over the next year, the FA is enhancing its online support network to 30,000 active referees in the game, following a rise in abuse on social media in particular.

“It’s part of our modern life,” said Farai Hallam, FA national referee manager. “A lot of our new referees, I’d say the majority, will be active on some form of social media. We see it on any matchday, it requires a support network around you. As a referee, that’s invaluable.”

“Social media abuse is an issue in society,” said Ambler. “We’ve got to make sure, from a refereeing standpoint, that, if we are lobbying government, to help players, coaches and managers, then referees are included there, front and centre.

“They are right up there for abuse, as we saw with Mike [Riley] and others. It’s bigger than just refereeing. It’s down to us to make sure we’ve got support mechanisms in place.”

The FA supports the use of more cameras to capture incidents of abuse towards officials in the grassroots game, but they are not expected to ask football lawmakers to allow the use of body cameras.

“I’m a little bit concerned that if you put a camera on somebody, they become a target,” said Ambler. “Why would you do that? I think there are better ways of doing it. I think cameras can work and, if you look at grassroots football, there are now security staff on the sidelines sometimes to control coaches and parents.

“I don’t see why cameras can’t be positioned like CCTV, for example, and go straight into the cloud so the behaviour is caught. That’s one way we might have the evidence to prosecute more.

“I do believe we need to find a way of collating more evidence to stop these incidents and make sure we do protect all participants.”