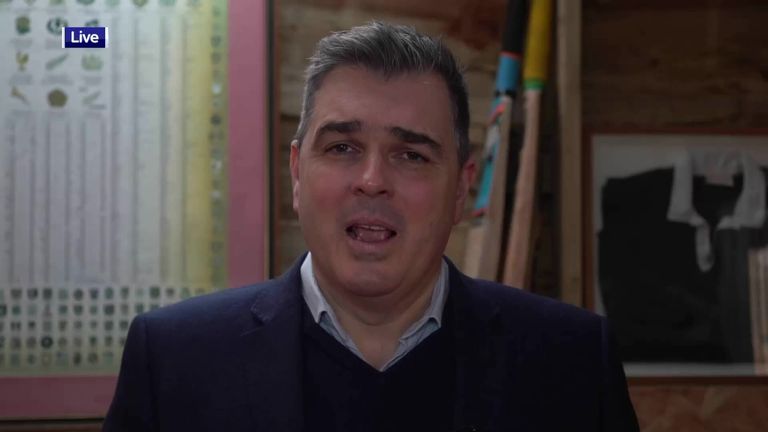 The decision to consider the 2020/21 season null and void for those clubs in the sixth tier is seen by some as a financial necessity. Others are left counting the cost of not continuing.

For Jonty Castle, chief executive at Fylde, five points off top spot with three games in hand on the leaders, it is a huge blow. He is determined to find another solution.

“My belief is that clubs were only presented with one option, which was the null-and-void scenario,” Castle tells Sky Sports. “If an alternative scenario was presented, I believe more clubs would continue. Some have privately expressed that view.”

In an open letter to Mark Ives, general manager of the National League, these clubs have even proposed a mini-league affording those who wish to play on the chance to do so.

“Our fallback position is a combined league,” says Castle.

“We are in the midst of a global pandemic. Clubs are in different financial positions and some have chosen not to continue. It is accepted now that this is the course of action.

“But I think the lens needs to switch and focus on those who do want to continue, if I am brutally honest. I believe the footballing family should allow us to continue. As long as there are enough teams, the fixtures of those teams who want to continue should be played.”

Castle is keen to stress that the costs do not disappear if Fylde stop playing.

“We have players on 52-week contracts and there are no break clauses within those contracts. We could place players on furlough again but all we are doing then is passing more costs onto the government. It is not something we aspire to do but we will have no choice if we are not going to continue. Then, do you top up the players’ wages or not?

“Players have short careers. They lost a portion of their career last season. They would be losing two-thirds of a season this season. There are consequences for the players.

“There is also a huge financial consequence if we have no money coming in but we still have to pay operational costs. We are still incurring those and we will continue to incur them.

“The owner has already come out and said that he will refund all season ticket holders if we do not play football, so there are costs there. We have sponsors who supported us last season and have done the same this season but if there is no sponsorship value in that, there are going to be some deep and difficult conversations to be had in the coming months.”

There is more to this than money too.

“There are consequences for the mental health and welfare of the players, the supporters, the community. They see football as the outlet. It is much more than financial.

“Especially in the current pandemic. Everyone is locked down, it is a pretty miserable time. Football brings some excitement. Why not give us the opportunity to play?”

Castle will soon bring up one year in the job. “It has been an interesting 12 months,” he says, with more than a hint of black humour. The pandemic put a stop to football within weeks of his appointment and relegation followed. Fylde also had to deal with the emotional difficulty of manager Jim Bentley undergoing double heart bypass surgery.

Thankfully, Bentley has recovered but the challenge for Fylde is ongoing.

“I am not sure what they can throw at us next,” says Castle.

With a wealthy benefactor in David Haythornthwaite, the club are aware that sympathy for their plight is at a premium but there is no denying fortune has not favoured Fylde.

“When Rick Parry [chairman of the EFL] was in dialogue with Mike Tattersall [then chief executive of the National League], he stated that for clubs to be relegated from the Football League, then relegation has to be in play within the National League system. That was the basis on which they curtailed the season but still allowed promotion and relegation.

“That is the premise of why they continued last season.

“We are fortunate to have a benefactor who is committed to supporting the club. At the same time, we entered into the season knowing that we would be playing for promotion and relegation. You would hope and expect that the National League would support the North and South continuing to protect the integrity of that relationship with the EFL.”

What happens next is unclear.

“We have presented our open letter to Mark Ives and he will take that to the FA now,” Castle explains. “We believe the open letter was the right thing to do to present him with an opportunity to find a different solution. He has obviously got to go to the FA for ratification.

“There is a fan element to this. Lots of them want to support this campaign. They are putting videos together explaining how important football is to them and their communities. That is another angle that will play out. We are all lobbying our MPs. I believe certain clubs have sought Queen’s Council and are consulting their legal position as well.”

Despite accusations of self-interest, perhaps the biggest argument in their favour is that there need be no unwitting losers in this proposed scenario.

“Those clubs that have been afforded the opportunity to freeze the season now and re-enter the pyramid at the same level next season, great. They can go into suspended animation, hibernation, and get themselves ready to start next season in August with fans.

“For all of those reasons, it is not hurting anyone to let us continue. If anything, it has flipped. There are 19 clubs that have voted to carry on, more that will consider it. There are no losers in letting us continue to play football. We just want the opportunity to play on and see if we can achieve that aspiration of promotion back to the National League.

“We can only pray that the footballing family supports us, the National League supports us, and the Football Associations supports us, in our aim to start playing football again.

“The only loser at the moment is football.”

China Charges Ahead With a National Digital Currency

Biden to Discuss Border and Other Issues With Mexican President