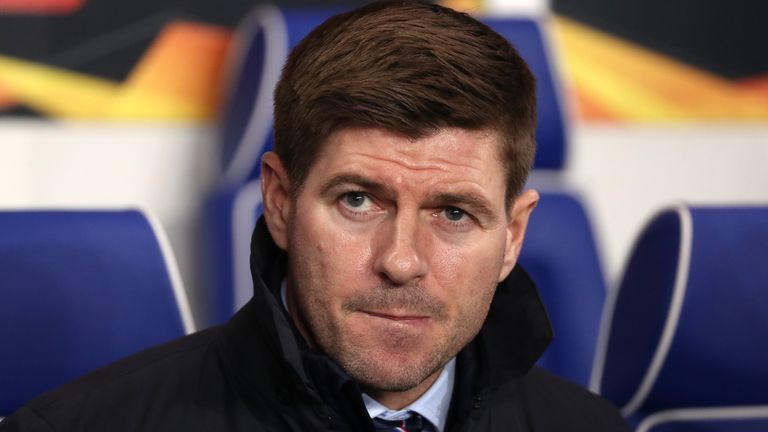 Steven Gerrard is ready to turn his attentions back to Rangers’ Scottish Premiership title tilt after seeing his side come out on top in a 4-3 thriller against Royal Antwerp on Thursday night.

After claiming a precious Europa League first-leg away win, the quest to become domestic champions resumes.

“I absolutely loved Thursday night and competing at that level,” Gerrard said.

“It’s a proper game of football with two teams full of talented players really going for each other.

“It was an emotional game but that’s how I like it. They are the games you want to be involved in.

“The players loved it as well. I could tell they were buzzing with the outcome after the game.

“We realise the Europa League level is going to be different from domestic but the games are coming thick and fast.

“It’s what we are used to in the schedule so we will get on with it and get them ready for the next challenge.”

Despite the win, the Ibrox side’s defence made it far too easy for the Belgians to twice go in front and Gerrard will not accept a repeat.

“It would be easy for me to say, ‘it was just one of those nights’,” he said. “But we didn’t defend well enough in situations.

“We know and the players know what we could have done better. We could have avoided all three goals but it just shows you will concede at this level if you are not right on your details.

“We need to improve on that in a week’s time, for sure.”

For now, it is back to Premiership action as Rangers chase down their first title in 10 years with Micky Mellon’s United hammered 4-0 on their last visit to Glasgow.

“There is a rivalry there so we know United will come to Ibrox ready to fight for everything,” Gerrard added.

“They did that in the first game at Ibrox but unfortunately on the day they met us, we were really on top form.

“Micky is a manager I really respect and I know he’s going to fire his troops up.

“But the focus will be on us. Our home form has been outstanding this season, 14 from 14 in the league. We want to improve on that.”

What a tremendous performance from Rangers in the first leg of their Europa League clash with Royal Antwerp in Belgium.

To win 4-3 in a pulsating 90 minutes highlighted again how impressive Rangers have competed in Europe under Steven Gerrard.

The bad news is that James Tavernier and Kemar Roofe picked up injuries that look like keeping them out of the team for a while. Leon Balogun stepped in as cover for Tavernier but as well as he defended, he will not offer as much going forward as the Rangers captain does.

Ryan Kent scored a wonderful goal and when he comes up with that type of end product in the final third of the pitch, there are few who can stop him.

Micky Mellon has been delighted with his team’s back-to-back wins over Ross County and Livingston in recent weeks but he must be wondering how his team can shape up to get a result at Ibrox where Rangers have still to drop a single point this season.

Lawrence Shankland is getting back to his best and offers their best hope of an away goal.