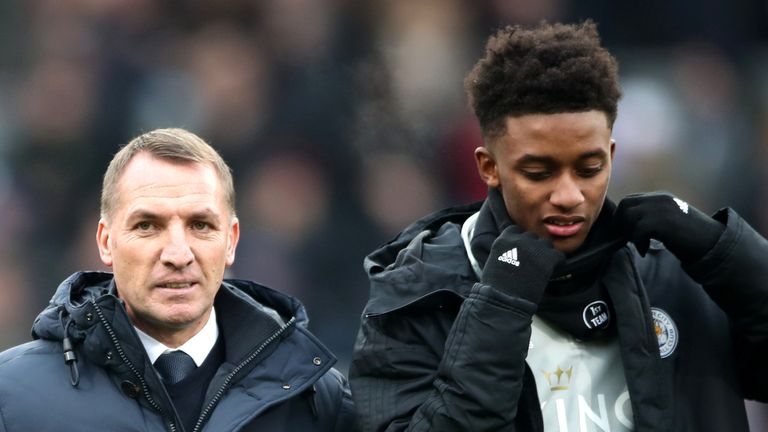 Demarai Gray has revealed he was never offered a new contract at Leicester and knew last season he had no future under Brendan Rodgers.

The 24-year-old winger joined Bayer Leverkusen in January after struggling to make an impact under the Northern Irishman.

He featured in Rodgers’ first seven games in charge after the former Liverpool and Celtic manager joined in February 2019 but then started just three more times in the Premier League. Gray’s contract was due to expire in the summer and, with no new deal on the table, the former England U21 international chose to move to Germany.

“No, there was no contract offer, there weren’t any discussions about it,” said Gray, who has signed an 18-month deal at the BayArena. “I didn’t go knocking asking for one because I wanted to be, if I was to stay, at a club where I was wanted and valued. I didn’t feel that, I wasn’t playing. I didn’t take it personally – it’s just football.

“We had quite a few chats throughout last season. It was a bit of a broken season but it was made clear if I wanted to move on I could. I thought it was the right time if I’m being realistic.

“As you approach the last year of your contract you get an idea if a team wants to keep you. I had a few discussions with Brendan – open and honest. I told him how I felt and where I stood and we agreed these things happen, where you do need a fresh start. There was never any drama.

“It was tough to deal with because I applied myself right, still trained and went in with the attitude hoping to get an opportunity.”

Gray left Leicester having helped them to a shock Premier League title in 2016 after a £3.5m move from Birmingham. He scored 13 goals in 169 appearances for the Foxes and admits he will always appreciate the opportunity he was given.

“I have a lot of respect for everyone at the club. It was a chapter in my life I took many memories from,” he said. “I went from my boyhood club to Leicester in the January to winning the Premier League six months later.

“The owners and Claudio (Ranieri) who signed me, people who are always going to be in my heart as they believed in me.

“There were good times and bad times. I was there from 19 to 24-years-old but I didn’t feel like I stabilised myself in the team or had a good run of games where I got confidence and kicked on. It didn’t end in the best way but there are moments I will cherish forever.”

Gray: Leverkusen challenge perfect for me

Gray has made 128 career starts – since his debut as a 17-year-old for Birmingham in 2013 – compared to 121 substitute appearances, having come off the bench 80 times in the Premier League.

His first two Leverkusen outings have also been as a second-half substitute, with Gray scoring on his debut to wrap up a 5-2 win over Stuttgart earlier this month. And he knows it is time to make his mark now he is in the Bundesliga.

He said: “In my position it’s about numbers and stats. It’s about being the best player I can be. I failed to get any momentum in the last 18 months and when you’re an attacking player it’s difficult to get consistent numbers.

“I got a good feeling from the club, the way this team plays and what they are competing for – Champions League football. (Bayern) Munich are at the top but it’s a club which will compete for titles.

“It made sense to me, it felt right which was most important. I didn’t want to make a decision just because I’m in a hurry to play football again. The challenge is the perfect one for me to step out of my comfort zone and try something new.”

Spider-Man: No Way Home Will Be Swinging Into Theaters (Supposedly) by the End of 2021