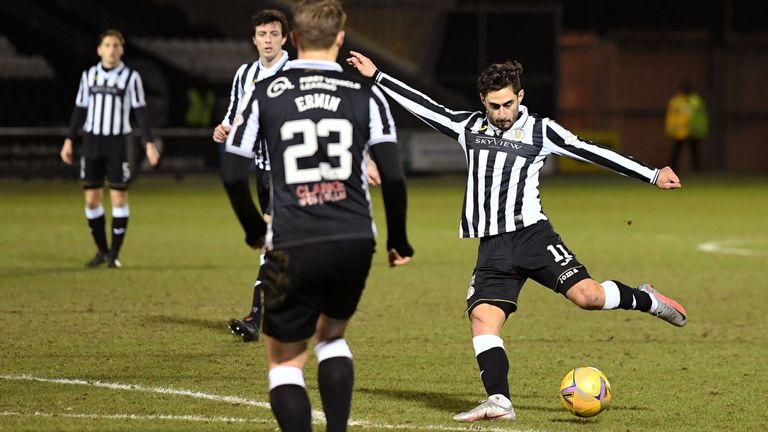 Jim Goodwin’s men were looking to reclaim their top-six slot and dominated the opening half with a string of big chances.

Saints did eventually find the opener eight minutes after half-time with an Ilkay Durmus strike but they failed to build on their lead and paid the price as Anderson pounced for the second game running to hand Brian Rice’s team a much-needed point.

Accies remain second bottom but only goal difference is now separating them from safety.

St Mirren – who climb back above Dundee United into the top half of the table courtesy of their own goal difference – will wonder how they were not three up by the break. Accies had Ryan Fulton to thank for that.

The keeper made his first intervention just seven minutes in as he parried away Durmus’ strike, while he was relieved to see a deflected Cameron MacPherson free-kick slip wide soon after.

It was virtually one-way traffic but Saints were cursing their luck after being twice foiled by the woodwork.

The first close call came after 22 minutes as Accies defender Aaron Martin nodded a vicious Kyle McAllister corner to Jonathan Obika at the back post. The striker turned it back into the six-yard box where Hamilton’s Brian Easton bizarrely headed against his own crossbar before Fulton just about clawed away.

That proved to be Martin’s last involvement as he went off injured, replaced by his namesake Scott. But the midfielder was lucky to escape serious harm himself as he jumped away from MacPherson’s dangerous studs-first lunge that referee Steven McLean decided did not even merit a foul despite the recklessness of the tackle.

The goal frame again came to Hamilton’s rescue as Richard Tait looked to finish off a fine passing move.

His spin and finish ended with the ball bouncing back off the base of the post. If that was not enough for the Saints wing-back, Fulton then flung himself brilliantly to his left to keep out a low volley before it crept over the line.

Having spent so much of the first half on the back foot, Accies could have found themselves in front at the break had St Mirren defender Marcus Fraser not raced back to clear Anderson’s shot off the line after gifting the ball to the striker in the first place.

The on-loan Aberdeen striker missed another golden chance five minutes into the second period as he nodded over from Scott McMann’s cross. But Saints got the breakthrough they richly deserved in the 53rd minute.

McAllister took his time picking a pass on the edge of the box before eventually squaring left to Durmus, whose drilled finish beating Fulton’s despairing attempt to push it away.

Accies, however, are famed for their survival instincts and refused to go down without a fight.

And they hit back after 68 minutes as Anderson finally found the target at the third attempt, with his 20-yard strike taking a cruel deflection off Joe Shaughnessy’s leg before flying past Jak Alnwick.

They might even have snatched a precious win as Scott Martin found Marios Ogkmpoe in behind the Buddies’ defence – only for Alnwick to pull off a vital block.

St Mirren boss Jim Goodwin: “We’re frustrated to only have drawn based on the chances we had first half. We hit the post and bar and Richard Tait forced Fulton into fantastic save down to his left.

“I felt we should have been in front but second half we didn’t pass the ball as well. We got sloppy in possession. We scored a really well-worked goal and it was a fantastic finish from Durmus.

“I’d said if we kept a clean sheet, we’d win but unfortunately we weren’t able to. The goal was disappointing from our point of view – there were a couple of deflections and it went past Jak Alnwick and there wasn’t a lot he could do.

“The point puts us back into the top six which is where we want to be. We’re in the driver’s seat with a fantastic opportunity and hopefully we can put on a better performance against Livingston at the weekend.”

“It was a good honest battle with two honest teams fighting for the win so nobody can complain. When we go 1-0 down, in the position we are in, to fight back and be on front foot trying to win the game was good to see.”

St Mirren host Livingston and Hamilton travel to Hibernian in the Scottish Premiership on Saturday at 3pm.