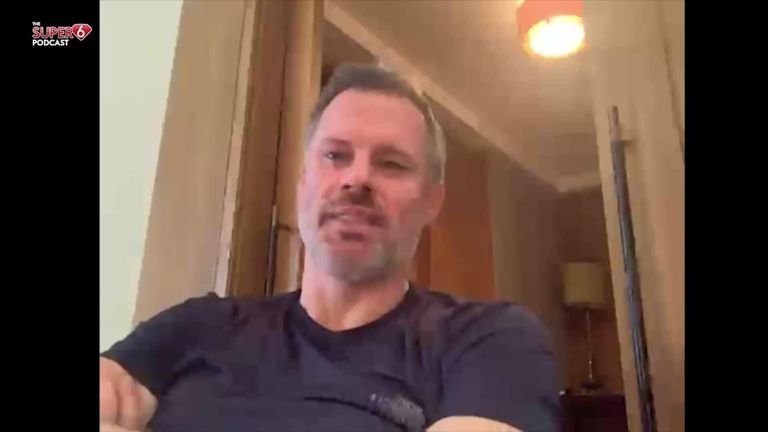 Jamie Carragher, a Champions League winner with Liverpool in 2005 and club legend, talks about that Champions League final, the homecoming off the back of it, and of course his relationship with Gary Neville, both before and after he joined the Sky Sports team.

Who cares about Gary Neville? He’s a right-back!

As you know, Carragher and Neville were not the best of friends when they played for fierce rivals Liverpool and Manchester United, but how deep did that actually run? Bayo Akinfenwa posed the question to the former and here was his response:

“I hated him a little bit. Can you hate someone a little bit? You just hate them, I suppose! There was a big rivalry between the clubs but he’s kissed his badge and said things about people from Liverpool. He was just basically playing up to the fanzines and trying to get in with the Manchester United fans.

“Who cares about Gary Neville, even if you’re a Man Utd fan? He is a right-back, nobody is really interested in right-backs. That was his way of trying to be popular with Man Utd fans and getting a song. He then went on Sky TV and it all came back to haunt him. He had to play ‘Mr Liverpool’, and support Liverpool and different things, to try and get them on side.

“You know what? He did get them on side, because the amount of times I am stopped in the street now and people are saying, ‘Gary Neville is sound isn’t he, he’s a great pundit’ and all of this. Fingers crossed they are saying the same things about me in Manchester!” Carragher laughed.

Everyone remembers, don’t they? Liverpool 3-0 down to one of the great AC Milan teams in the Champions League of 2005, a comeback any team could only dream of, to then win the trophy on penalties thanks to the heroics of Jerzy Dudek.

It ranks highly in the memories of Carragher, but what else about it was staggering to see from his perspective?

“That was a five-day bender,” Carragher explained to the Super 6 Podcast. “That was when the Champions League final used to be on a Wednesday rather than a Saturday. I finished on Sunday so it was five days. I celebrated in the hotel till around four or five in the morning, Thursday was the homecoming, so we were out again after that, and there must have been about a million people on the streets of Liverpool, it was amazing.

“It was special – it was almost as good as the game, and realising what effect the game had on people. Listen, it’s nothing to do with me, but sometimes you are involved in a game that is mad famous, people remember it, and I think it was more than winning the Champions League.

“I think when we saw the people on the streets, it was one of those moments where I think everyone can remember where they were when they watched it, the emotions you had when watching it, whether you were a fan of Liverpool or another team.

“Football is so tribal and the rivalries are so big, I think it is a game that will never be forgotten as it was so up and down, and the emotions just went from zero to 100 very quickly.”

Liverpool: Another striker a must?

Jurgen Klopp’s side are concentrating solely on a top-four spot rather than focusing on retaining their Premier League title, but the former Liverpool defender thinks they should be looking at bringing someone into the opposite end of the pitch:

“Liverpool don’t score any goals from midfield, and at the moment they are massively relying on Mohamed Salah and Sadio Mane, and nobody else looks like they are going to score. Diogo Jota has been a miss, but whether Jota would ever be first choice in a Liverpool team I am not sure yet. He made a great start when he came in but I think you need to add goals to the team.

“Whether that is a midfield player who scores goals, as it looks like Georginio Wijnaldum is going to move on, or it is a case of doing something different through the middle in terms of Bobby Firmino.

“You look at Liverpool’s attacking players, they don’t actually have a striker. Jota is not a striker, he is a wide player, same with Mane and Salah. They have got Divock Origi, but he is nowhere near good enough, and he a lot of the time plays out wide as he cannot play as a centre-forward,” Carragher told the Super 6 Podcast.

“Bobby Firmino plays that role, but we always talk about him being a false-nine, so he is not an out and out striker. I think Liverpool could do with bringing a striker in, just to shake things up, and primarily someone who gets goals. I think there is too much pressure on those two players [Salah and Mane] at the top end of the pitch to score goals.

“If they don’t score, Liverpool don’t look like scoring and what was interesting in the Champions League game, Liverpool won 2-0 and it looks a lot rosier, but Liverpool capitalised on two big mistakes from the opposition. They didn’t actually create that much themselves.

“That is a big problem for Liverpool at the moment, scoring goals and creating big chances. They were very clinical off the back of the opposition making mistakes, but they did not really open the opposition up, so that could have easily been a 0-0 game or it could have been a game you lose 1-0, as what happened at Leicester.

“Liverpool played really well, no different to that at Leicester, 70 minutes in, not creating too much but dominating the game, and then you make a mistake and lose the game. At RB Leipzig, they were the ones who made a mistake, so I think there is definitely room for a goalscorer in the team.”

Listen to the full episode with Dave, Bayo and Jamie Carragher on Spotify or on Apple Podcasts now! Stay tuned for the upcoming shows, which are available on all channels every Thursday.

If you missed earlier episodes, don’t worry. You can listen back to interviews with Conor Coady, Michail Antonio, Jack Wilshere, Declan Rice and Ben Foster, on YouTube or on Apple Podcasts.

You too can get involved, and potentially scope a quarter of a million pounds for free. All you need to do is correctly predict six scorelines. Play for free, entries by 3pm Saturday.

How a deeper role gave Davies a bigger impact