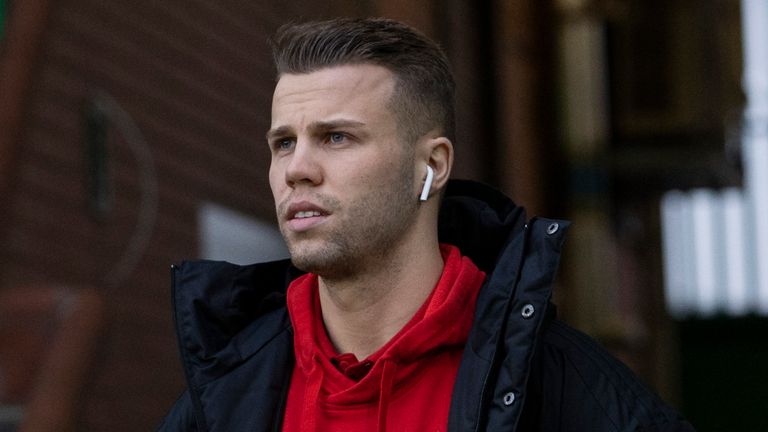 The 25-year-old, who joined the Dons on loan from Swiss side St Gallen on transfer deadline day last month, was sent a message on the social media site on Thursday night.

Hibernian – one of Kamberi’s former clubs – are also attempting to ascertain the identity of the account holder who sent the abusive message.

A Hibs spokesman said: “We condemn any and all abusive posts directed at footballers or others in the public eye. It is completely unacceptable. This individual is not on our database but we will look to see what action is open to us.”

Aberdeen assistant manager Tony Docherty says the club will rally around Kamberi to ensure the former Hibs and Rangers striker is fully supported in the wake of the taunt.

“I’m not a big follower of social media, but I was made aware this morning,” said Docherty.

“Knowing Flo and the kind of character he is, I don’t think it will affect him. I don’t know the exact ins and outs of it but he’s got a strong personality and we’ll get round him because he’s our player.

“Since he’s come in the building we’ve been really impressed with him, not just with his footballing ability, but with his personality and enthusiasm.

“We’ll make sure we get round him. It’s just totally unacceptable.”

This comes just a day after Arsenal striker Eddie Nketiah was the latest Premier League footballer to receive racist abuse on social media.

Nketiah, 21, was sent the racist message telling him to leave Arsenal in response to a training picture he posted on Twitter ahead of Arsenal’s Europa League tie against Benfica with the caption “Working with a smile!”.

High-profile players in both the men’s and women’s game have been victims of racial abuse on social media in recent weeks, while Premier League referee Mike Dean was subjected to death threats following a controversial decision.

The Premier League, FA, EFL, WSL, Women’s Championship, PFA, LMA, PGMOL and Kick It Out all co-signed a letter earlier this month to Twitter CEO Jack Dorsey and Facebook founder, chairman and CEO Mark Zuckerburg, asking them “for reasons of basic human decency” to use the power of their systems to end the abuse.

Facebook-owned Instagram announced new measures, including the removal of accounts to prevent abusive messages on its platform and developing new controls to help reduce the abuse people see.

Twitter has also given users greater control over their conversations including allowing users to choose who can reply to conversations they start.

After Swansea midfielder Yan Dhanda was subject to racial abuse on the Instagram, Facebook said the person who racially abused him was only temporarily blocked from sending Instagram messages and will not have their account shut down.

The punishment given to the perpetrator actually gives more fuel for hate as now they know for sure there are no firm consequences to their actions online. His dm’s may be restricted but the ramifications of his actions continue to ripple through our community…😤😤 https://t.co/1wmC5zB6GF

Dhanda responded by saying: “I was more angry than anything [at Facebook’s response]. For the person to be able to send abuse on social media and to then just be banned from sending messages for a short period of time was disgusting really.”