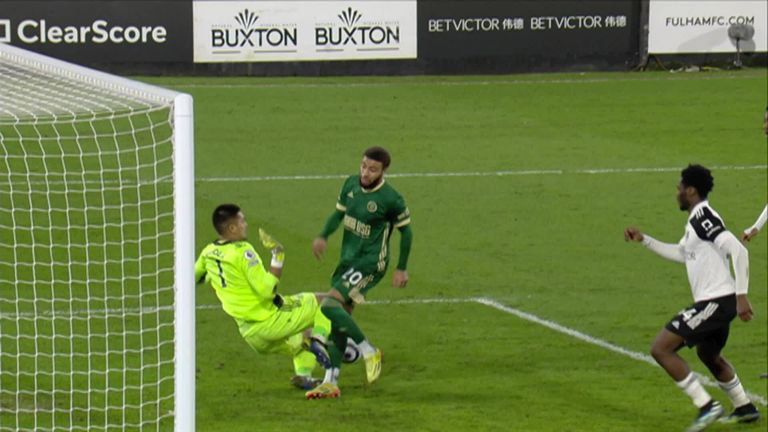 Fulham gave their survival hopes a huge boost as Ademola Lookman’s strike earned his side a 1-0 victory over relegation rivals Sheffield United.

After a lacklustre first half, Lookman blasted Scott Parker’s side to all three points in the 61st minute, deepening Sheffield United’s plight in the process.

The victory sees Fulham move to within three points of safety. Parker’s men now have 17th-placed Newcastle, who face Manchester United on Sunday evening, firmly in their sights.

Meanwhile, Sheffield United’s Premier League status is hanging by a thread as Chris Wilder’s side remain 14 points from safety, rooted to the bottom of the table.

Fulham dominated possession during a cagey first half in what was billed as a must-win match for both sides.

Despite the home side’s dominance, they struggled to create any real clear-cut opening and they failed to really test Aaron Ramsdale in Sheffield United’s goal.

Man of the match: Ademola Lookman.

Harrison Reed had a shot from distance, which was straight at Ramsdale, with the goalkeeper also called into action to deny Lookman from range.

At the other end, the Blades, despite being defensively solid, struggled to lay a glove on Fulham as they went into the interval without a touch in the Fulham penalty area.

More urgency was expected from both sides with crucial points up for grabs in the race for survival, and, at the start of the second half, Ruben Loftus-Cheek went close to giving the home side the lead, but his goal-bound shot was cleared off the line by George Baldock.

The deadlock was finally broken in the 61st minute as Joachim Andersen’s long pass released Lookman into the penalty area. The 23-year-old cut inside Ethan Ampadu before firing a low drive through Ramsdale and into the back of the net.

The goal cajoled Sheffield United into life and less than five minutes later, they had their first shot on target, with Alphonse Areola denying Enda Stevens with his legs.

And the Blades had a big penalty shout in the final stages when Areola dived at the feet of Jayden Bogle. The goalkeeper did manage to get a touch to the ball, but he clattered into Bogle. No penalty was given as Fulham held on for a crucial victory.

“Like all these games it took one moment to win the game and it came from Ademola and he found the net.

“I’m really proud of this team because it’s a huge moment. Not just this game but this week. It’s been massive. We all understand what we need to do. We need results more than performances, but I felt like we got both tonight.

“We need to rest now; we’ve had a tough week. We’ll get back to it on Monday ready to push again. It’s a tough league. We understand that. All we need to do is focus on us. That’s all we’ve done this season. When we’ve had our little dip, we’ve focused on us. We’re a young team who are growing fast. I have big belief in this team.”

On staying up: “That’s the aim. We’ve been in this position for a while now. We’re comfortable with where we are, we know the projections we’re on. Let’s try and rack up some wins and put pressure on the other teams. That’s the main focus.”

Sheffield United boss Chris Wilder: “There wasn’t a lot in it, and it was decided by a little bit of quality. We had opportunities to get back into the game and didn’t take them. And then we had a ridiculous VAR decision.

“I thought it was a reckless challenge from the Fulham goalkeeper. It’s a penalty. To be honest I’m more grateful that there wasn’t an injury because it was a reckless challenge. Yes, I’m clutching a bit, but it was a penalty all day long. No question from me. I am completely seeing a different game. The stills and watching it in slow motion, how does VAR not see that? I don’t care if he’s being brave or whatever. It was a ridiculous challenge. Another fine margin has cost us.

“These are big experiences we’re all going through. This is a difficult position for all of us. There’s always something to play for. I won’t accept relegation until it happens. And even then, I still won’t accept it.

“I can’t mug everybody off by saying we’re going to have a miraculous recovery. I won’t allow it [to happen] to our supporters. It looks like next season we’ll be in the Championship.”

Man of the match – Ademola Lookman

Ademola Lookman was Fulham’s hero once again as he scored what could prove to be a crucial goal in his side’s bid for survival.

He has now been directly involved in more Premier League goals than any other Fulham player this season (four goals and three assists).

The striker, on loan from RB Leipzig, has also scored four goals in 22 Premier League appearances this season – only in 2017-18 (five in 11 Bundesliga appearances) has he netted more in a top-flight campaign.

Fulham travel to Crystal Palace next Sunday at midday, before Sheffield United host Liverpool, also next Sunday, kick-off is 7.15pm.