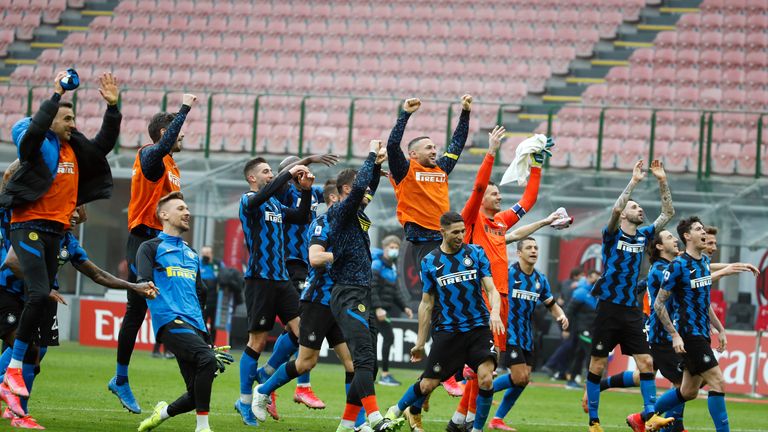 Romelu Lukaku capped off Inter Milan’s triumph in the Milan derby as they hammered AC Milan 3-0 to move four points clear at the top of Serie A.

Antonio Conte’s side were exhilarating on the counter-attack and went ahead within five minutes, Lautaro Martinez heading home unmarked from close range from a Lukaku cross.

The Argentine finished off a magical team move to double the lead as he tapped in from an Ivan Perisic cut-back after a Christian Eriksen defence-splitting pass (57).

Lukaku then put the nail in the coffin with a sensational solo run as he collected the ball in the centre circle and surged through the middle before beating Gianluigi Donnarumma at his near post.

The three points take Inter four points clear of AC Milan at the top of the league, one week after overtaking their city rivals who had been top since October.

League leaders Inter headed into the clash having had a full week of rest and it showed in the early stages as they applied some instant pressure to their rivals’ back-line.

Lukaku made the decisive breakthrough as he glided past Hernandez on the right flank twice trying to feed Martinez in the six-yard box, and it was second time lucky as his cross picked out his strike partner unmarked to give Inter the lead.

Antonio Conte’s side wing-backs pushed high up the pitch, with Ivan Perisic creating multiple openings, in particular a near-post cross which was begging to be turned home by Lukaku but the Belgian was deceived by the bounce and failed to turn in from close range.

The striker had a chance to redeem himself, but his near-post effort was beaten away by Donnarumma and Martinez was unable to bundle in the rebound.

Samir Handanovic kept Inter’s lead intact early in the second half, as he made a triple save to deny Zlatan Ibrahimovic twice and then Sandro Tonali from scoring an equaliser.

But despite all the AC Milan pressure, Lukaku started off another magical Inter counter-attack which ended up with Martinez tapping home a second from a Perisic cut-back.

Inter found themselves three up shortly after as Lukaku deservedly scored in his fifth successive Milan derby, catching out Donnarumma at his near post with a powerful finish after a sensational solo run on the counter.

Ibrahimovic left the pitch with 15 minutes to go as AC Milan tried to grab a consolation goal in the final stages but were once again denied by Handanovic.

The 3-0 win is a serious statement of intent from Antonio Conte’s side, who are in no way flattered by the scoreline and have now taken control of the Scudetto race in their quest to bring the title back to San Siro.

Lacklustre AC Milan will rue to miss their ability to truly test Inter’s defence, with Ibrahimovic enduring a torrid afternoon, and their title credentials will be tested once again when they face third-placed Roma next weekend.

Man of the Match – Romelu Lukaku

Often criticised for his performances in big games, Lukaku silenced all talk delivering a spellbinding performance across the whole 90 minutes.

Four minutes in, he turned on the afterburners and showed his team player qualities by picking out Martinez with a peach of a cross.

During the game, he was the target-man Inter craved. He held the ball up, waited for the constant runs of Hakimi and Perisic on the wings, fed them in and collected any spare ball around the box, dictating the tempo of the play even from his forward position.

That was the case for the second goal, as he showed incredible strength, vision and awareness of his team-mates’ movements by kicking off a sensational counter-attack with a simple move on the halfway line.

There was nothing simple about his goal though, an unbelievable solo run and finish worthy of winning any game of football – let alone the biggest game in the Serie A season so far.

He managed to score in his fifth successive Milan derby – that’s every single one since he joined the club in August 2019. Lukaku looked absolutely unplayable on Sunday and should Inter win the Scudetto in May their star man will take a large portion of credit.

AC Milan will look to secure their progression to the Europa League round of 16 when they host Red Star Belgrade on Thursday night at 8pm. They then travel to face Roma at 7.45pm on Sunday night.

Inter Milan will continue their quest for a first Serie A title in 11 years against Genoa at San Siro on Sunday – kick-off is at 2pm.