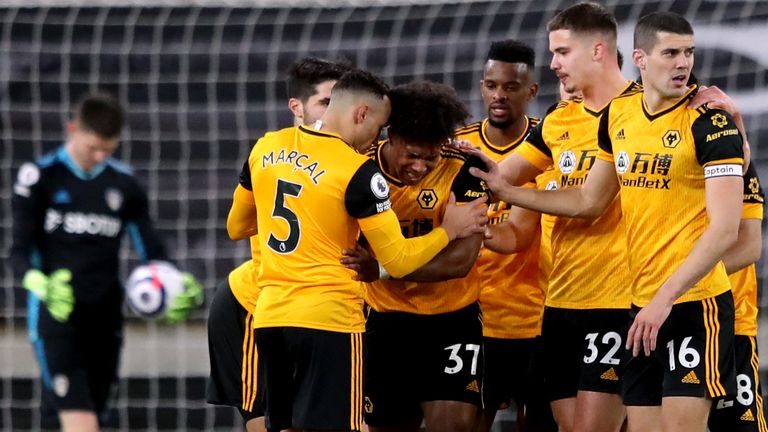 Wolves secured back-to-back Premier League wins for the first time since October as Illan Meslier’s unfortunate own goal secured a 1-0 victory over Leeds at Molineux.

Meslier had denied the hosts on several occasions during a vibrant opening half but he was left helpless when Adama Traore’s long-range shot thundered off the crossbar and hit his back to rebound into the net (64).

Patrick Bamford thought he had levelled matters when he converted from Tyler Roberts’ pass but he was denied by the offside flag before Rui Patricio was drawn into action in stoppage time to thwart Helder Costa.

The result moves Wolves above Leeds in the Premier League table as Nuno Espirito Santo’s side rise to 11th ahead of the weekend’s remaining fixtures.

Man of the match: Pedro Neto.

How Wolves secured double over Leeds

It is 10 points out of the last 12 points available for Wolves, whose manager stuck with the same starting XI that secured the comeback victory at Southampton last weekend.

Leeds went into Friday’s game needing just one win to reach the landmark figure of 200 in the Premier League and Mateusz Klich hit the post after 27 minutes with Pascal Struijk seeing his follow-up effort saved by Patricio.

But Wolves looked the more dangerous, and in Pedro Neto they had the game’s most adventurous player.

The 20-year-old forced Meslier into a fine one-handed save from distance – one of four first-half attempts – while the Leeds goalkeeper was also tested twice by Nelson Semedo but neither side could find the breakthrough before the break.

Tyler Roberts replaced Ezgjan Alioski in Leeds’ only change for their trip to Wolves. Alioski dropped to the bench following the 4-2 defeat at Arsenal on Sunday.

Wolves were unchanged from their 2-1 win at Southampton last weekend as Willian Jose continued to lead the line.

The second period was one of immense frustration for Leeds, who fell on the wrong side of fine margins to be consigned to a 12th league defeat of the campaign.

But first came Wolves’ 11th attempt of the night as Neto selfishly went for goal himself despite having Willian Jose in support but he failed to trouble Meslier from a tight angle.

Then a period of 90 seconds that would decide the contest. Leeds came within a whisker of breaking the deadlock when Cooper rose once more to meet another devilish Raphinha free-kick but the centre-back could only head straight at Patricio before Conor Coady was in the right place to clear Bamford’s rebound.

Wolves strode down the other end as Traore stepped inside Luke Ayling, spun away from Pascal Struijk, and unleashed a venomous drive that crashed off the crossbar, rebounded off the fallen Meslier and dropped over the line, becoming the youngest goalkeeper to score an own goal in Premier League history.

It was harsh on Leeds, and Wolves would lead a charmed life in the final 20 minutes. It was the same combination that had threatened all evening that nearly wiped out the moment of misfortune, but Cooper was again denied from close range by Patricio from Raphinha’s excellent cross.

Leeds knew it wasn’t going to be their night with 13 minutes remaining, however, when Bamford’s fine strike from Roberts’ pass was chalked off for a marginal offside call, with replays showing Coady’s back leg was fractionally in front of the Leeds striker’s body before his confident finish beyond Patricio.

Deep into stoppage time, there would still be one last chance for Bielsa’s side to salvage a point, but Patricio was again on hand to deny Costa as Wolves secured a league double over their opponents.

Wolves boss Nuno Espirito Santo: “We’re always trying to chase consistency but it’s something that’s really hard. We’re consistent with our approach to games as we look at the details and this is really important if we are to perform better. The standards are high and that requires more responsibility from all of us. We have to work harder every day.

“I say we play in Champions League almost every week as the competition is so good. Neto knows that every game that he plays, he faces a tough opponent.

“They have a unique approach to the game and the boys did really well. In some moments we were stronger but Leeds also had chances and created problems for us.

“Players like Adama [Traore] and Pedro [Neto], when they have the ball and start running, are really dangerous. It was a beautiful strike. It is a hard moment for the keeper but he did very well.

“We still have some issues to assess but the approach that we have during these tough moments – always believing, always committing. You can’t say anything about the attitude of the players. But we chase the high standards we have and let’s keep on doing that.”

Leeds boss Marcelo Bielsa: “We attacked well, and we didn’t defend badly. In the majority of the game, there were few periods where we weren’t the dominant side. We had double the chances that they did.

“I prefer not to link the result with luck. I have the idea that when the team must act in a way that ensures that luck isn’t a factor in the result. It’s clear that the result today was defined by their efficiency.

“There were only a few moments in the game where we didn’t dominate. The offensive game we had was sufficient to score at least one goal and in a game of small margins I had the feeling we were the superior side.

“We had 10 chances from different areas and I thought our offensive game was good. I don’t think we conceded the dominance of the game too often. Of course they have two wingers who are very dangerous and although we didn’t dominate them completely I thought our defensive performance was good.”

Man of the match – Pedro Neto

It was a freakish own goal that decided this tight affair but in Pedro Neto, Wolves had the game’s outstanding individual.

Wolves had been restricted to shots from distance early on, but Meslier had to be at full stretch to prevent the 20-year-old from adding to his tally of five goals this season.

It was Neto vs Meslier in the opening 45 minutes as the Portuguese carved out a total of four attempts while his 57 touches across the entire match was more than any other Wolves player.

Neto also provided more passes in the opposition half (27) and produced more crosses (7) than any other team-mate as his recent good form continued under the Molineux lights.