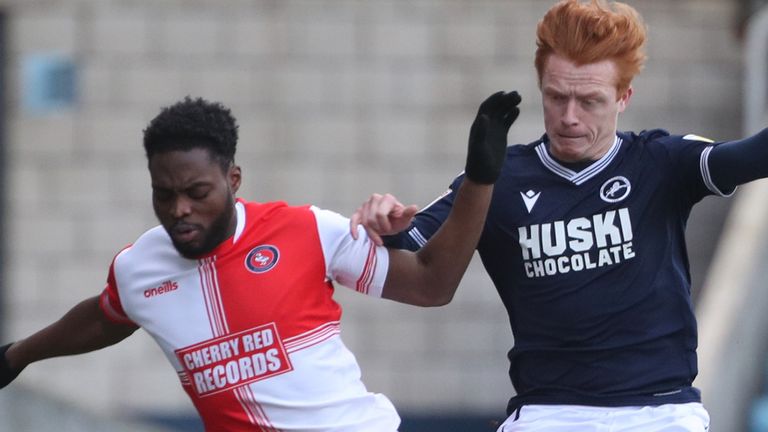 Millwall extended their unbeaten run in the Championship to eight games after a 0-0 draw with Wycombe at The Den.

Gary Rowett’s side came closest to taking all three points through Scott Malone’s second-half strike but David Stockdale, back in the Wycombe goal after an emergency loan at Stevenage, ensured it ended goalless.

The hosts created the first chance of the match after 11 minutes when the marauding Mahlon Romeo switched onto his left foot and fired low and hard at Stockdale before Jed Wallace blasted the follow-up over the bar from an offside position.

Neither side managed to take control of the game or threaten the goalkeepers until Ben Thompson caught hold of an awkward volley but failed to keep it down.

The Chairboys registered their first attempt in the 36th minute when Daryl Horgan fired at Bartosz Białkowski’s top corner but the Polish stopper was untroubled and beat the ball away.

Rowett’s side did not look like a team that had won their last three league matches as Mason Bennett wrangled his way through the Wycombe defence but the angle was not quite right for him and resulted in another cumbersome effort.

Three minutes after the break, Romeo made another one of his impressive forward runs and clipped it into the box for Bennett who ended up in a heap on the floor, allowing Stockdale to collect easily.

Stockdale was called into action again moments later when Malone found himself in space on the left flank and let fly from 16 yards but the former Fulham man reached out a strong hand to keep it out.

There was a long delay for Wycombe skipper Anthony Stewart to receive treatment around the hour mark but he was passed fit to continue.

The Chairboys were convinced they should have a penalty when Fred Onyedinma got goalside of Alex Pearce and went to ground but the appeals were waved away as it looked destined to end goalless.

Still Millwall searched for an equaliser and might have found one with three minutes remaining but Stockdale was waiting at his near post to gather up Jon Dadi Bodvarsson’s flicked header.

The draw leaves Gareth Ainsworth’s Chairboys rooted to the bottom of the table while Milwall continue their assault on the top half, with a trip to strugglers Luton Town next on the agenda.