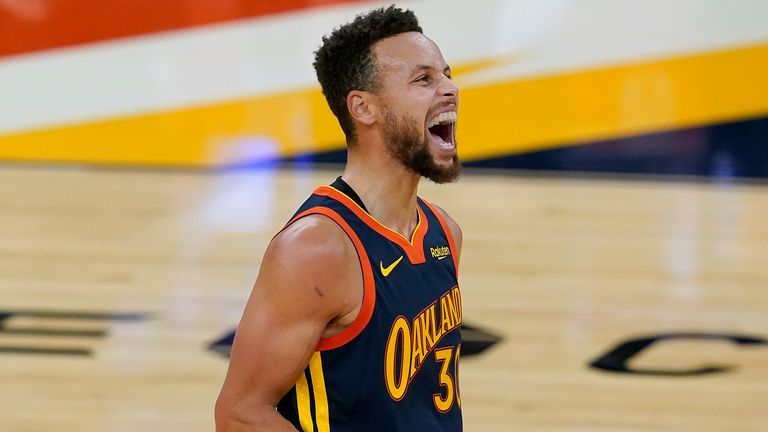 The early voting returns have given an indication of who is likely to be selected first for March’s All-Star game but recent performances – in particular by James Harden and Damian Lillard – may have swung the voting in their favour late on.

Will it be enough to earn a starting berth?

One man locked into the West’s two backcourt spots is Steph Curry who, let’s be honest, was made for the All-Star game.

As of the early voting returns, Steph was cruising as the top guard in the Western conference with over four million votes.

He’s averaging 30 points per game, five rebounds and six assists, numbers on par with his career-best MVP year in 2014/15.

Curry is carrying an otherwise mediocre Golden State team without the injured Klay Thompson and as it stands they sit seventh in the conference – higher than expected and good enough for a spot in the new play-in tournament come the end of the regular season.

After playing only five games last season due to injury it’s only right Steph is back dancing around defenders and drilling deep threes the second he crosses half-court.

This will probably still be Luka Doncic instead. But it really should be Dame.

Lillard has put the Blazers on his back, leading them to six straight wins without either CJ McCollum and Jusuf Nurkic, while averaging 29 points, four rebounds and seven assists.

In fact, Dame has scored at least 30 points and dished at least 10 assists in the last three games. Wednesday night’s game against the Pelicans was the second in a back-to-back and he still dropped 43 and 16. What he’s doing is absurd.

Then there’s the fact that, right now, he’s by far the best crunch-time scorer in the league.

In games with a five-point scoring margin or less heading into the final five minutes, Lillard is first in the NBA in points, field goal percentage, three-point percentage, free-throw percentage and overall record.

Lillard in the clutch (5-point games in the last 5 minutes) this season:

As of the most recent fan voting returns, he holds a lead of around 400,000 votes over Lillard and will probably edge in ahead of the Blazers point guard.

Regardless, given Dallas’ record stands below .500 and Dame is playing out of his mind at the moment, a late swing could certainly take place.

Both players are locks for the game so it doesn’t matter too much, but it’d be refreshing to see Lillard rewarded by the fans for playing winning basketball without two of his best teammates.

Even if he wasn’t averaging 26, eight and eight for what feels like the 900th year in a row, it’s LeBron. He’s making the All-Star game as a starter whatever happens. He has the most votes of any player with almost 4.4 million. Let’s not waste any more time here.

Like Steph, Nikola Jokic is a player made for the All-Star game. A big man with the court vision, playmaking instincts and ball-handling of a guard, The Joker is arguably the most entertaining player in the league to watch night-in and night-out.

Averaging 27 points, 11 rebounds and nine assists, all career bests, the Serbian center is a lock for a starter spot in the West and, if you ask me, a dark horse to take home the All-Star MVP award given his propensity for flashy passes and monster triple-doubles.

Even before Anthony Davis went down, re-aggravating his right Achilles injury, Kawhi Leonard was a nudge ahead of him in the fan voting. Expect him to maintain that even as he has missed the last three games himself with a leg injury.

Kawhi is averaging 27, six rebounds and five assists, while the Clippers sit third in the Western Conference. Both he and teammate Paul George will make the All-Star game and deservedly so.

Beal has made the All-Star game before in both 2018 and 2019 but looks set to become a starter for the very first time after amassing the most votes in Washington Wizards history – over 2.5 million as per the last voting returns.

The shooting guard leads the league in points per game with 33, three points ahead of both Steph Curry and Joel Embiid, whilst adding five rebounds and four assists.

As bad as the Wizards are, with an overall record of 9-17, fourth worst in the NBA, Beal deserves his spot

Hear me out. This should be James Harden starting particularly after his heroics on Tuesday night, leading the Brooklyn Nets back from 24 points down against the Phoenix Suns – the largest half-time deficit overturned in the franchise’s history.

His numbers are just flat out better, with the former Houston Rockets guard averaging 24 points, eight rebounds and a league-leading 12 assists since joining the Nets.

Harden’s playmaking is second to none in the league and he’s a guy you want starting in the All-Star game, unselfishly dishing to other players while hitting step-back threes when he needs to.

Regardless, Irving is also a fine choice by the fans.

Kyrie has 28 points per game (on track for a career-high), five rebounds and six assists for the Nets this season and his dizzying handles, craftiness around the rim and pure one-on-one scoring ability belong in the All-Star game as much as Harden’s passing does.

Fortunately for us, both will comfortably make it, with Irving the likely starter.

After missing the entirety of last season with an Achilles injury that would have ended most careers, Durant is back and looks (frighteningly) every bit as good as before.

At 32, this will be Durant’s 11th All-Star selection. He deserves it as much as anyone.

The reigning two-time MVP has also been an NBA All-Star starter for the past four seasons. In all likelihood, that isn’t going to change anytime soon.

The Greek Freak’s numbers remain absurd (28, 11 and six) and he is once again driving Milwaukee to a high playoff seed in the East despite a thin roster. He’s a no brainer.

To complete the teams we have Joel Embiid, the Sixers center currently leading the MVP race, depending on who you ask.

Embiid is averaging 30 points per game, 11 rebounds and three assists, with Philadelphia topping the Eastern Conference rankings thanks to a record of 19-10 at the time of writing.

According to the voting returns, Embiid has garnered over three million votes, almost double that of his closest competitor for the final frontcourt spot in the East, Jayson Tatum. This will be his fourth straight All-Star selection, all as a starter.

In case you needed reminding: trust the process.