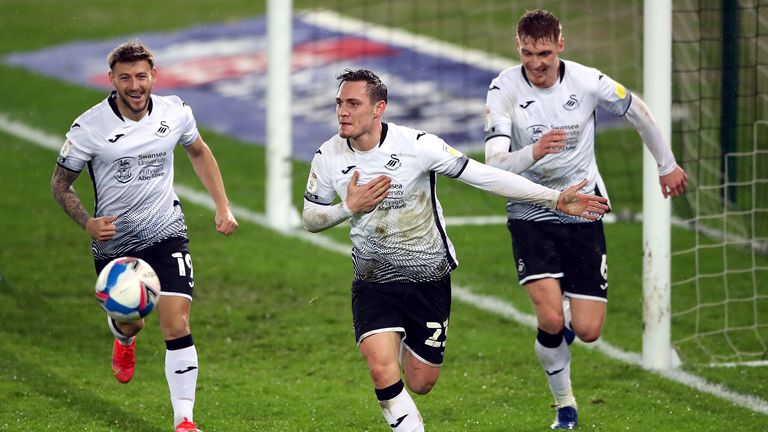 Chris Hughton’s visitors were left kicking themselves as they had the game’s best opportunities and the in-form Swans struggled to find their rhythm.

Anthony Knockaert was Forest’s main threat, but the visitors paid the price for failing to convert and Wales full-back Roberts made them rue those missed chances late on.

Swansea had hammered Forest 5-1 when the two sides met in the FA Cup on January 23 and it was no surprise the home side had most of the early possession.

But it was far from a one-sided contest and Swansea’s left wing-back Jake Bidwell escaped a card for diving in on James Garner. Forest’s players screamed for a red, but not even a booking was given by the referee.

Steve Cooper’s men were sloppy in possession and their passing tempo was not what their head coach would have wanted.

A wicked cross from the right from Knockaert nearly resulted in the opening goal, but Swansea’s defence scrambled the ball away before Filip Krovinovic volleyed over.

Swansea’s lethargy was summed up right on the half-time whistle when they failed to mark from a short corner. Forest played the ball to Knockaert who curled a shot off the crossbar.

Knockaert started the second half as he ended the first with another great chance, this time heading wide at the back post, before Joe Lolley had two shots saved from distance.

Forest’s dominance continued and Lewis Grabban was the next to go close. The Forest captain fired wide from close range when he should have hit the target.

Cooper had seen enough and swapped defender Kyle Naughton – who left the field with a bloody nose – with Jordan Morris.

USA attacker Morris moved to the left wing as Swansea switched to a more attacking formation, but it made little difference.

Grabban butchered a fine chance when Forest caught Swansea on the counter.

Veteran striker Glenn Murray came on to replace Grabban and sniffed out an opening from a low Forest cross from the right, but there was no sign of improvement from Swansea until Roberts popped up with the only goal.

It came out of nowhere with Bidwell putting in a high cross from the left and his fellow wing-back Roberts rose highest to give Swansea’s automatic promotion hopes a shot in the arm.

Swansea’s Steve Cooper: “I’m not going to worry too much about how it looked. I’m not going to sit here and say we were brilliant in the game, because in parts we weren’t. In the end, we managed to create a good moment to go and win the game and we might look back on this result at the end of the season.

“I just thought the game was heading towards a 0-0 draw. Forest are a really good team in good form. They’ve got loads of experienced and talented players. We felt we had to make some tactical changes in the second half, get some more attacking players on and hope things would turn a little bit. I’m delighted with the win but knowing we will need to play better in the next game.”

Nottingham Forest’s Chris Hughton: “I’m really delighted with the performance, but hugely disappointed with the result. The performance shows as a team we are getting closer, but if you look at the last two games we’ve had one draw and lost the other.

“That’s the difference between us and Swansea. I’m sure they would admit we were the better side and they did not play as well as they could, but they came away with the three points. We need to be more clinical. We can’t allow that lapse of concentration. The players all know it’s a game we should have not only not lost, but won.”

Jones still 100 per cent committed to England cause

Amid the Rubble of Mosul, Francis Offers a Salve for Iraq’s Wounds

Israel reopens to fully vaccinated ‘Green Pass’ holders — nearly half of the population.