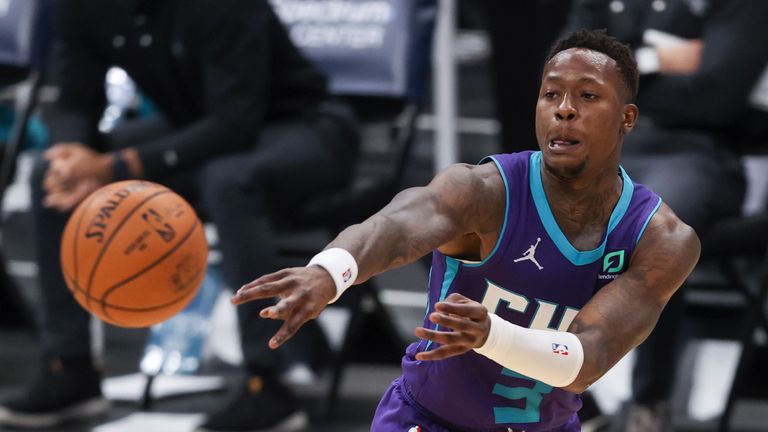 As I started writing this week’s column, my phone alerted me that it is exactly 365 days since I was in Chicago to watch the NBA’s best talent on display at All-Star Weekend.

Back then, I never could’ve predicted that upon my return we would be plunged into almost a full year of lockdown, however in this crazy unpredictable world there is always one certainty: the NBA keeping us entertained.

It’s time for the winners and loser (just one loser this time, I wanted to keep things positive) of the week!

While all of the excitement surrounding the Hornets is centred around LaMelo Ball and the impressive start to his NBA career, another guard in Charlotte is the one I think we should also be taking note of.

Over the past week, Terry Rozier has averaged 30.8 points, with a staggering efficiency of 68.8 eFG%.

If you’re wondering what eFG% means, it stands for Effective Field Goal Percentage. It’s a statistic that adjusts for the fact that a 3-point field goal is worth one more point than a 2-point field goal, and if you’re a basketball nerd like me, the formula is: (FG + 0.5 * 3P) / FGA.

Scary Terry’s great efficiency has been boosted by shooting 50 percent from behind the arc over the four games that the Hornets played.

In fact, over the course of the season so far, he’s attempting 7.7 threes per game – that’s more than Bradley Beal, Luka Doncic, and others – while making 44.5 percent of them.

Previously used as a primary point-guard, Rozier has found his groove as a secondary initiator and reliable spot-up option.

I don’t think anyone predicted Terry being sixth in the league for three-pointers made this season but playing alongside facilitators such as Gordon Hayward and LaMelo Ball has allowed Rozier to knock down plenty of catch-and-shoot looks, while contributing on both sides of the court, as the Charlotte Hornets remain one of (if not THE) most fun team to watch in the league right now.

Although he’s knocking down a lot of catch-and-shoot looks, don’t think for a second that the man notorious for eating spaghetti, sugar & ranch sandwiches doesn’t have some moves in his bag.

Just listen to the commentator’s reaction to this beautiful hesitation move.

The Phoenix Suns used the momentum from their #NBASundays victory against the Celtics to extend their winning streak to six, beating Eastern Conference heavyweights Philadelphia and Milwaukee on the way to an unbeaten week. They also secured victories over the Cavaliers and the Magic.

Over the past week, Devin Booker has returned to looking like the Devin Booker that Drake rapped about in ‘Sicko Mode’.

He’s averaging 32 points over the past four games, to go along with five rebounds and five assists. Also, let’s not forget this huge shot in the face of Ben Simmons.

36 points for Devin Booker as the Suns won their fifth straight, including the step-back three pointer to ice the game over Simmons.

The boy is a stone cold killer pic.twitter.com/vItoXexFBA

Chris Paul missed Tuesday’s win against the Cavs, but E’Twaun Moore stepped in and scored 17 points. CP3 returned to the line-up as his usual composed veteran self, scoring almost 20 points per game whilst shooting 57 percent from behind the arc, and not missing a free-throw.

Phoenix’s back-court has finally come together to become what Suns fans hoped it would. The win against the Bucks was the first time that Booker (30) and Paul (28) had both scored 25+ in the same game. Monty Williams’ squad has now won nine of their last 10, and as the chemistry between their two lead guards continues to develop, Phoenix could cause some serious problems for the other teams out West.

The Portland Trail Blazers won all four of their games this week, pushing them up to fifth place in the West! (Not bad for the worst half-court defensive team in the NBA.)

The bottom 5 half-court defenses in the NBA per Cleaning the Glass.

They started the week with a win over the Orlando Magic as Carmelo Anthony dropped 23 points, but it’s the Thursday night win over the Eastern Conference-leading 76ers that I want to focus on.

In his 18th year in the league, Melo dropped 17 points in the fourth quarter and hit the game-winning free-throws for Portland!

He then followed it up with 23 points in the win against the Cavaliers, before another double-digits scoring output against Dallas in Monday’s win.

Carmelo has scored 26,784 points over the course of his career so far, good enough for 12th in NBA history. The veteran scorer is averaging 13.5 points per game and the Trail Blazers still have 46 games left to play in the regular season.

If we say for example he misses six of those for rest and injuries, he’s on pace to score 540 points if he maintains his average, which will see him surpass Hakeem Olajuwon and Elvin Hayes as he rises to 10th on the all-time scoring leaderboard.

Carmelo Anthony may be older, but he’s still one of the greatest scorers ever when he needs to be. He’s helping take some of the pressure off Damian Lillard down the stretch, and has enough experience to not be rattled in any situation. Crazy to think that just a couple of seasons ago no teams wanted to sign him.

Carmelo is here to remind everyone that even though LaMelo Ball might be making a name for himself: there is only one, and will only ever be one true Melo.

As we approach the All-Star break, Boston has two players who should most definitely be selected among the league’s elite: Jaylen Brown and Jayson Tatum. The Celtics as a team, however, currently have a 13-13 record as they lost three of their four games over the past week.

Last night’s loss against the Washington Wizards who reside at the very bottom of the standings, was possibly the worst Boston Celtics performance I’ve seen in a very long time.

The Celtics had only two players score in double figures as they were completely dominated by Bradley Beal & co. This comes just days after a loss to the Detroit Pistons, the team second from bottom in the East. The Celtics were also humbled by the Utah Jazz (who remain red hot) and the lone bright spark was the win over the Toronto Raptors.

The problem for the Celtics is inconsistency. We know what Jaylen Brown will bring. We know what Jayson Tatum will bring (with the exception of his disaster-class on Sunday) but the rest of the squad is far too inconsistent. The win over the Raptors only happened because Semi Ojeleye caught fire on his way to 24 points, and rookie Payton Pritchard scored 20 off the bench.

With all due respect to Semi and Payton, they can’t be relied upon to score like that on a regular basis.

I know Marcus Smart has been out injured, but no matter how much of a high-character guy he is, that doesn’t excuse the lack of heart displayed against the Wizards last night.

The reason for the inconsistency is how the roster is constructed. The Celtics have an elite duo who are surrounded by: an undersized point-guard in Kemba Walker who is still struggling to find his feet after a serious injury, two veterans in Teague and Thompson that not too many other teams were keen on signing, a couple of rookies and a bunch of guys that should be playing in the G-League.

Aside from Smart and Theis, and the underrated Grant Williams, the two Jays have absolutely nothing in the form of help.

Contenders such as the Lakers or Clippers boast a crew of savvy veterans and impactful role players to help their stars sail through the regular season. The Celtics on the other hand, do not.

I know Tatum and Brown are young and still have a long window of title contention ahead of them, but given the way they’ve started playing this season, why not try to be better now?

The bench is filled with young players who have barely any NBA experience that would be much better suited to a rebuilding team, not one with two superstars that are hungry to win.

It’s clear that with the Eastern Conference becoming more competitive each year, Danny Ainge needs to make some roster changes before this season’s deadline.

In the meantime, my humble suggestion is that once Marcus Smart returns, he should replace Kemba Walker in the starting line-up.

I know bringing Kemba off the bench may make him the most expensive sixth man of all time, but the Celtics bench is in desperate need of some scoring. Also, in order for him to find consistency and confidence, it may be beneficial to see him going up against second-units. His jumper is starting to return, but he still needs to become more comfortable attacking inside and getting to the foul-line.

Make sure you tune-in to the Heatcheck every Tuesday for the rest of the season, because if Boston keep playing like this, there will be plenty of jokes to be made at my expense.