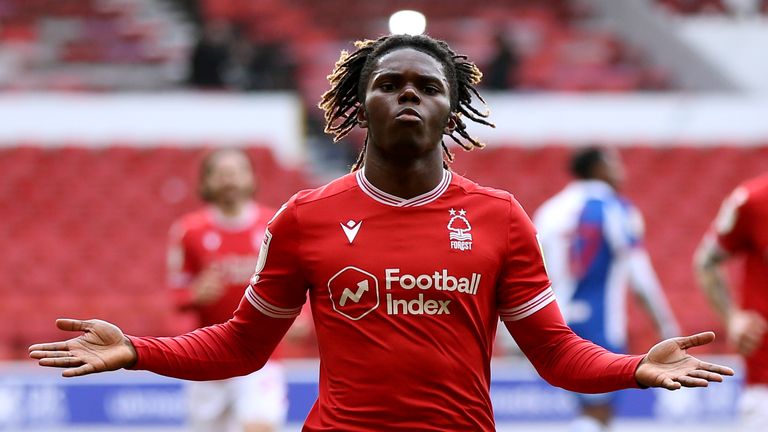 Teenager Alex Mighten scored the second goal of his career to help Nottingham Forest earn a narrow 1-0 win over Blackburn to ease their relegation fears.

Chris Hughton’s side also needed a Brice Samba penalty save to deny Adam Armstrong, as the keeper made amends for conceding the 73rd-minute spot-kick in the first place.

But Mighten’s 26th-minute goal was enough to secure three precious points for the home side as they bounced back from a narrow defeat at Swansea.

It was a more troubling result for Tony Mowbray’s visitors, who have now suffered four-consecutive league defeats.

Blackburn had seemingly settled into the game the quicker of the two sides but it was Forest who came closest to breaking the deadlock in the 14th minute.

Anthony Knockaert swapped passes with Glenn Murray before sidestepping two defenders in the penalty area and beating goalkeeper Thomas Kaminski with a driven shot – but Ryan Nyambe was well placed to head the ball clear off the line and prevent the goal.

Forest took the lead in the 26th minute when a Knockaert free-kick was only half cleared, to the edge of the area, where Mighten hit a powerful shot that – with the aid of a significant deflection – left Kaminski helpless as the ball arrowed into the back of the net.

The home side should have made it 2-0 when Murray had a shot charged down, only for the ball to fall for him a second time, a few yards out from where he lashed a low effort back across goal and narrowly wide.

Ben Brereton had another effort for Blackburn but the ball rolled harmlessly wide.

Forest came close again as another Knockaert free-kick delivery this time picked out James Garner, who saw his deft flicked header bounce away off the crossbar.

The home side could easily have added to their 1-0 lead but Blackburn almost went in level at the break, with Armstrong also denied by the woodwork when his vicious 20-yard shot cannoned off the post.

Filip Krovinovic fired a low shot wide as Forest looked for a second after the break.

But home stopper Samba also had to make an important save to keep out another effort from the lively Armstrong, who then sent another effort only inches the wrong side of the post.

Cyrus Christie was the latest player to be denied by the woodwork when his driven shot came back off the post – with substitute Lyle Taylor guiding the rebound wide.

It looked like it would be a costly miss when Nyambe was brought down by Samba in the box, for a clear penalty.

But the big keeper made amends perfectly when he made a brilliant save, diving to his right, to keep out Armstrong’s effort from the spot.

'Canelo has ended debate about world No 1'