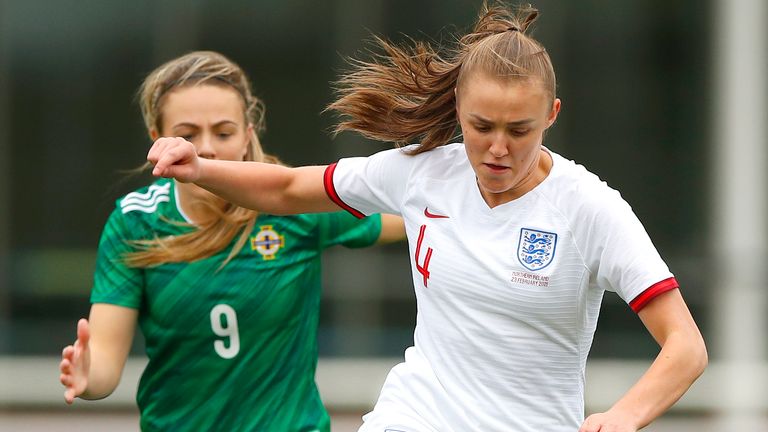 England were playing their first international fixture in 11 months, but there were few signs of rust on the Sir Bobby Charlton pitch at St George’s Park.

Jill Scott earned her 150th cap for England during the friendly, and after White’s quickfire double (18, 23), Lucy Bronze was also on target (29) during a dominant outing from the Lionesses.

White completed her hat-trick four minutes after the interval before further strikes from Rachel Daly (67) and an Ella Toone penalty (75) completed the rout.

The Lionesses enjoyed long spells of possession in the opening 10 minutes of the game with Northern Ireland showing their nerves as they battled the wind to find some rhythm.

Scott, who captained the side, showed her experience early on with a lovely through ball to White, who was unable to capitalise as Northern Ireland goalkeeper Becky Flaherty came out bravely to clear the danger. Bronze also came close with a point-blank range header which was saved well by Flaherty.

But it only took England 17 minutes to find the back of the net through a clinical finish from White, who capitalised on a Northern Ireland defensive error to score her 37th goal for her country. Five minutes later, White again found herself again on the scoresheet, heading home from the end of a Bronze cross.

Bronze also found herself on the scoresheet, linking up with her Manchester City team-mate Lauren Hemp to tap in the third from close range.

It was business as usual for England as they came out strongly in the second half. White completed her hat-trick three minutes from the restart with a smooth turn from Scott’s pass to bury the ball into the top right corner.

It was almost a fourth for White as she once again found the back of the net from a Chloe Kelly cross, only to be flagged offside.

But England’s mood failed to dampen as Daly scored England’s fifth goal shortly after with a tap in from close range. It was a dream debut for Toone, who scored from the penalty spot to round off the scoring and make it six following

Ebony Salmon was awarded her first cap for the Lionesses after a string of impressive displays for Bristol City this season. There were also debuts for Sandy MacIver and Lotte Wubben-Moy, who ensured England ended their emphatic run out with a clean sheet.

The Lionesses never looked out of control and their tempo would have impressed interim boss Riise. Northern Ireland will be disappointed the scoreline did not reflect their efforts to press higher in the second half.

Only 18 players will be selected to represent Team GB at the Olympics in Tokyo this summer, but several individuals will have pleaded their case to be given a prized place as the post-Neville era began with victory in convincing fashion.

“England have lots of positives to take from this game. It’s been a very strong start and I am sure Hege will be very happy. You can already see that England are stronger at attacking set-pieces, and they are looking very threatening in the box.

“They were so clinical in front of goal. They just showed their ruthlessness both in and out of possession. They recovered balls really well throughout and the interchange of movement was brilliant.

“For Northern Ireland, despite the result, they will take a lot from this game into their European Championship play-off match as they were tenacious and worked hard for the full 90-plus minutes. If they apply the same pressing and aggression against other opposition, they will get success.

“Ellen White definitely had her shooting boots on. She found herself in great positions throughout the game and Scott had a fine display as well, getting an assist on her 150th cap for England. It’s going to be really hard picking a squad moving forward.

“Sarina Wiegman will be so impressed by how they played collectively. A lot of players got minutes having not played an international game for almost a year. There are so many options in this England side which is exciting moving forward.”

England Women next face Canada on April 13 in a friendly at a venue to be decided.

Qualifying for the 2023 Women’s World Cup, to be hosted by Australia and New Zealand, should also commence this year.

However, there is still no official date for when the draw will be made for the UEFA qualifying groups, nor has the FA yet confirmed any other 2021 friendlies.

Northern Ireland are through to the Women’s Euro 2022 play-offs, with the draw set to take place on March 5. Both legs of the play-offs are scheduled to take place between April 5 and April 13.