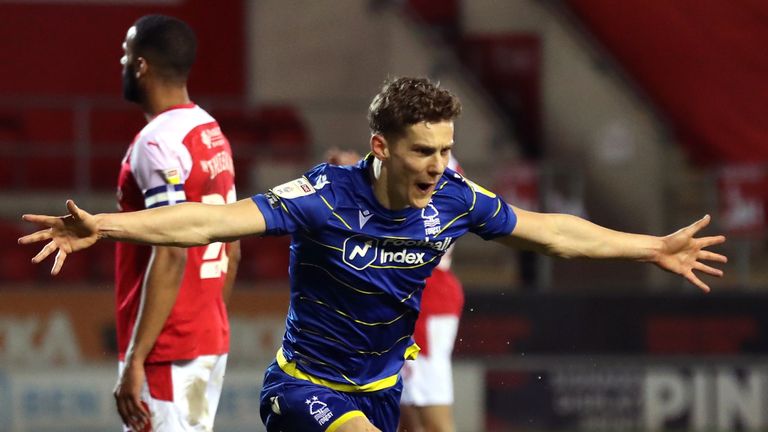 Nottingham Forest managed to put further distance between themselves and the drop zone courtesy of a 1-0 win at Rotherham United.

Forest made it four league wins on the road in 2021 as Chris Hughton’s outfit pulled away from Rotherham, who remain in the relegation places and are now 10 points adrift of the visitors.

Ryan Yates struck the decisive goal in the second half to seal victory.

The next opportunity also fell the way of the Millers when Cafu was dispossessed and Ben Wiles led a counter-attack which resulted in Michael Smith blasting wide from the edge of the box.

The strong wind had both teams struggling to adapt and few chances were carved out in the opening 25 minutes.

When Forest did get going, it was through right-back Cyrus Christie who cut in from the right and fired a powerful effort into the side-netting.

Viktor Johansson was forced into his first save on the stroke of half-time as he acrobatically clawed out Anthony Knockaert’s free-kick from the edge of the area.

Knockaert was proving to be the Forest dangerman and he led a rapid break down the right flank before curling in a swerving effort which Johansson was again equal to.

Forest forged ahead in the 67th minute when a looping ball fell kindly to Yates, who smashed it beyond Johansson from close range.

Rotherham had gone two up top prior to the goal and the new man Freddie Ladapo was just inches away from getting them quickly back into the game but Wiles’ shot across goal just evaded the striker.

The substitute should have levelled the scores when Ihiekwe headed into his path but Ladapo got into a tangle and Joe Worrall managed to block Clark Robertson’s shot.

Forest substitute Lyle Taylor had a decent chance to make the points secure but after twisting and turning, he fired into the side-netting from the edge of the box.

Joe Lolley was the next to test Johansson but again the Swede was equal to a curling free-kick from distance and easily gathered the strike.

Rotherham were left cursing their luck and the woodwork in stoppage time as Smith’s header from close range cannoned off the bar and away to safety.

Rotherham’s Paul Warne: “It was a little bit disappointing. The best team won. We just looked jaded really. With hindsight, I should have changed the team more. We didn’t have loads of options where our energy is in the middle of the pitch. I can’t criticise the lads because they have been amazing. They just had a little bit more guile than us.

“I thought they played us really well. I just felt we weren’t winning enough first contacts and that their set-pieces were more deadly than ours. They just had more stardust than us. We had a couple of half-chances later on. On another night one of those goes in. But unfortunately it wasn’t to be. We just need to pick them up and strap them up because there is another game on Saturday.”

Nottingham Forest’s Chris Hughton: “It was a tough game. It was what we expected and if you are able to get an earlier goal it opens the game up a little bit more. We had to defend in numbers. It was quite difficult to get a real good rhythm in the game. Sometimes these kind of wins can be the most pleasing ones.

“At the moment, it’s a very happy changing room and sometimes that comes with this type of win. Rotherham are a good side. Nobody has beaten them convincingly and that was the case again. I thought we were the better side but it was a game that could have gone either way.”